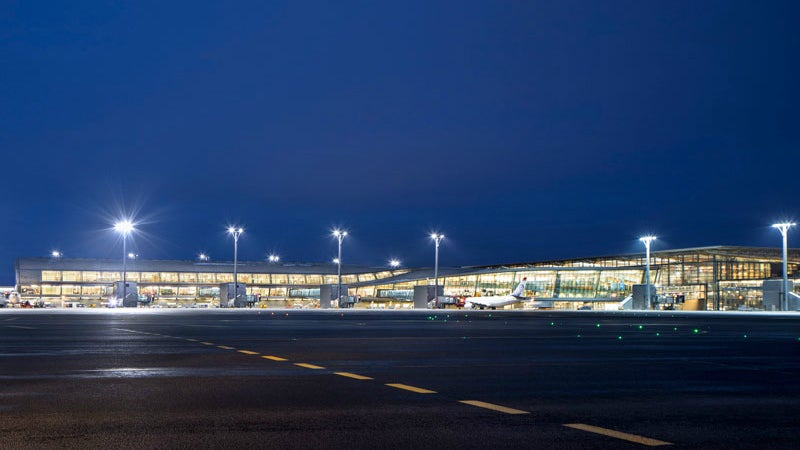 Oslo International Airport opened its newly expanded area to public in April 2017. Initiated to address the growing passenger traffic, the expansion project boosted the airport’s capacity to 32 million passengers a year from the previous 17 million.

The $1.67bn project primarily focused on expanding the Oslo International Airport terminal building, airside and landside areas, adding a new pier, and reconstruction of the train station. The investment was financed through aviation fees paid by the airlines, and commercial income from concessions and airport parking.

The expansion transformed Europe’s most punctual airport both aesthetically and functionally, making the way for Norway to become more competitive on an international level.

The expansion project doubled the size of the existing terminal from 148,000m² to 265,000m². Both arrivals and departure halls were expanded to 52,000m². The departure hall features 34 new walk-through check-in desks to reduce the length of the queue lines.

The security area was expanded with 12 new channels, which along with earlier desks are now assembled at one place. The number of restaurants increased from 20 to 37, while the retail stores increased to 21. Four new kiosks were also added bringing the total number to ten.

More space is available for passengers before and after security checks, in addition to shorter walking distances to both domestic and international flights. New washrooms and changing rooms were also added as part of the expansion.

A new third pier towards the north of the terminal was constructed, complementing the international pier on the east and the domestic pier on the west. The new pier is 300m-long and covers an area of 63,000m². It has two levels to handle both domestic and international traffic, separated at each level.

The new pier features a distinct architecture and includes 17 new gates, 11 of which have bridge connections. The gates have double the capacity of the existing gates and are capable of handling two aircraft at a time.

The pier is constructed with curved glulam beams and cladded with oak, creating an efficient and flexible passenger flow. The pier also features new shops and restaurants at the entrance.

Numerous measures were taken to ensure the expansion to be environment-friendly and its operation reduced the carbon footprint. High amount of recycled materials, eco-friendly insulation, concrete and recycled waste were used for the construction.

The pier’s roof is made of wood instead of metal, and features low-carbon technologies such as district heating and natural thermal energy. The pier building along with the arrival and departure halls were constructed as passive energy structures that consume half as much energy as the current terminal.

"A new third pier towards the north of the terminal was constructed, complementing the international pier on the east and the domestic pier on the west."

Extensive use of wood and other energy solutions incorporated in the expansion helped the airport achieve the world’s first BREEAM ‘Excellent’ sustainability rating.

The airport is the one of the few airports in Norway to use treated sewage and past winter snow to recover energy, which will be used for various heating and cooling purposes in the airport.