Expand
The airport is spread over an area of 295.6ha and can handle 25 million passengers per year.
The airport has one domestic terminal and one international terminal, as well as a cargo building.
The expansion of the airport, which was delayed for several months, was ultimately started in July 2010. 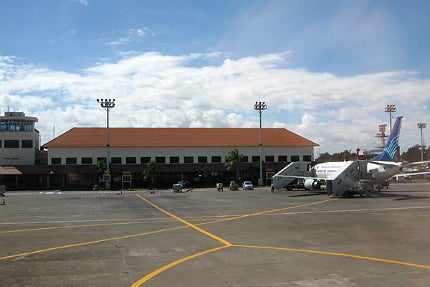 The airport is spread over an area of 295.6ha and serves about 12 million passengers per year. Located 2.5km away from the resort of Kuta, it is the third-busiest international airport in Indonesia.

It was originally built in 1931 in the village of Tuban.

The airport earned International Civil Aviation Organization (ICAO) recognition in 1963 and a new international terminal building and runway extension to 2,700m were completed in 1969.

In 1978 another new international terminal building was built and the old building became a domestic terminal.

Phase I in the development plan for the airport from October 1989 to August 1992 included further extension of the runway to 3,000m, a taxiway relocation and expansion of the apron.

Air navigation and fuel supply facilities were also developed, along with a passenger terminal building.

Phase II started in February 1998 and was completed in June 2000. The airport’s aviation facilities were developed during this phase.

A set of flight control facilities was introduced in June 2009.

A new expansion project started in 2010 and completed in September 2013 extended the international terminal increasing the annual passenger handling capacity from 10 million to 25 million.

In May 2009, a design proposed by PT Angkasa Pura I for the expansion of the airport was rejected by the governor of Bali because 40% of all space was designated for commercial use.

In October 2009 another design, which designated 30% of the total area to commercial use, was accepted.

The expansion of the airport started in November 2010 after several months of delay. The government spent $187m towards the project.

The programme involved extension of the international and domestic terminals and the expansion of parking lots and other facilities.

The international terminal is comprised of a departure and an arrival terminal. A festival plaza divides the terminals.

The departures terminal has a waiting room and ten boarding gates, each equipped with aviobridges and automatic aircraft parking systems. The boarding rooms can hold 3,175 passengers. The baggage claiming room has 146 conveyors and 62 scale units.

The domestic terminal has a boarding room that can accommodate 2,118 people. The domestic luggage claim room has two L-shaped luggage conveyor units.

The current runway is 3,000m long and directed along 09/27. It has an asphalt surface and is made from concrete.

The airport has a 55,000m² car park facility with five exit taxiways and two parallel taxiways.

An aircraft parking lot is available for seven class B, 10 DC and 25 class B 737 aircraft. Three helipads are also available.

The airport was certified as meeting US Government security standards on 11 October 2007.

The decision was based on Transportation Security Administration (TSA) assessments, which concluded that security measures at the airport complied with ICAO standards.

A new air traffic control (ATC) system at the airport was among flight control facilities introduced in June 2009.

The area control centre (ACC) in Bali is divided into three sectors: Bali West Control, Bali Centre Control and Bali East Control. All sectors are fully controlled with the help of radar and non-radar. Bali West Control covers position 1140E – Semarang at altitudes from 18,000ft to 46,000ft, where the frequency of radio communications is 123.9MHz. The transmitter is located in Surabaya.

Bali Centre Control is positioned 1140E covering altitudes from 18,000ft to 46,000ft. It has a frequency of 120.7MHz. Bali East Control is also positioned 1140E – Indonesia and Australia border covering altitudes of 18,000ft to 46,000ft. The frequency of this sector is 128.3MHz and the transmitter is located in Kintamani and Waingapu.

The approach control office (APP) controls the aircraft within a 10nm to 60nm radius of the airport between the surface and 2,500ft to 19,000ft by means of full object radar detection.

The aerodrome control tower (ADC) is responsible for efficient movement of vehicles on taxiways and aircraft on the ground and in the air. The ADC has a control radius of 0nm to 5nm (DVOR – BALI as point 0) at altitudes of 0ft to 2,500ft.

Communications and other airport systems

Standard navigation tools at the airport include primary and secondary surveillance radars, a lighting system, landing strip lighting, a precision approach path indicator (PAPI), approach and threshold lamps, a rotating beacon and a light for identifying the runway’s end.

The fuelling depot, operated by PT (Persero) Pertamina, has six concealed tanks with a total capacity of about 20 million litres.

Ground handling services are controlled by eight companies. In-flight catering is organised by two national companies located at the east of the terminal. A quarantine office is available.