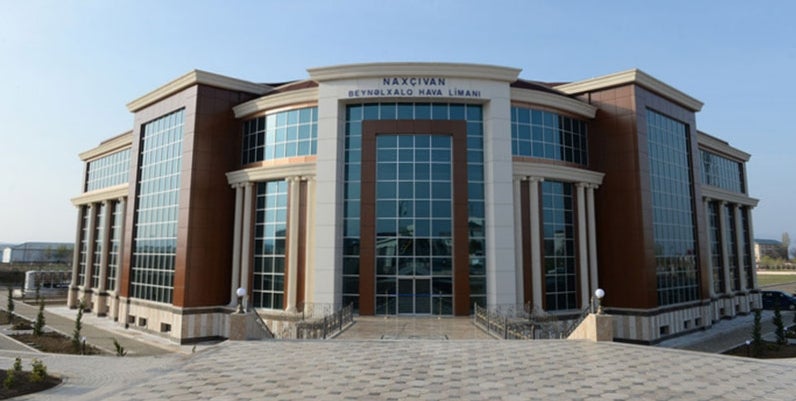 Nakhchivan International Airport is a civil / military airport located 4km away from the city (centre) of Nakhchivan, the capital of the Nakhchivan Autonomous Republic of Azerbaijan. The region being a landlocked exclave, the airport is the only air gateway to reach the outside world.

Azerbaijan Airlines offers services at the airport to destinations, including Baku, Istanbul and Moscow. It handled 526,155 passengers and 4,224 aircraft movements in 2014.

Commissioned in the 1970s, the airport was originally built to accommodate small aircraft such as Yakovlev Yak-40 and Antonov An-24. Due to the Armenian blockade of the Nakhchivan Autonomous Republic, aviation became the only means to communicate with the outside world, which resulted in the development of the airport for civilian services in late 1990s.

The passenger terminal at Nakhchivan International Airport was reconstructed in 2015 to double the passenger handling capacity and ensure better passenger facilities.

New facilities at the reconstructed terminal include two jet bridges, elevators for passengers with reduced mobility, a new 41m-long baggage conveyor system, two escalators and two lifts. Other facilities include nursery, medical station and decorated interiors on the ground and first floors. The project also created separate sections for boarding and arriving passengers.

As part of the terminal reconstruction and restoration project, a new administrative building with 53 offices was constructed and opened in April 2015. The management, which used to work in the terminal building, was then shifted to new premises, creating more space for new developments at the terminal.

Facilities at the passenger terminal

The 24,447m² cargo terminal has a loading capacity of 100t of cargo a day and storage capacity of 20t. Goods can be stored in the storage chamber and a small-sized cargo storage area for 24h. Ten medium-sized trailers to transport goods ten small wagons are provided at the terminal for cargo transportation.

“The region being a landlocked exclave, the airport is the only air gateway to reach the outside world.”

The terminal is equipped with a modern lighting system, air-conditioning, firefighting equipment and video surveillance. X-ray inspection apparatus at the terminal entrance ensures safety of goods.

Nakhchivan International Airport has two runways, designated 14L/32R and 14R/32L. Both measure approximately 3,300m-long and 45m-wide and are paved with concrete / asphalt surfaces. They are equipped with lighting systems and other runway equipment.

Different means of transportation are available from the airport such as taxi services and large-sized bus coaches. Taxi services are offered from any part of Nakhchivan to the airport and vice-versa.