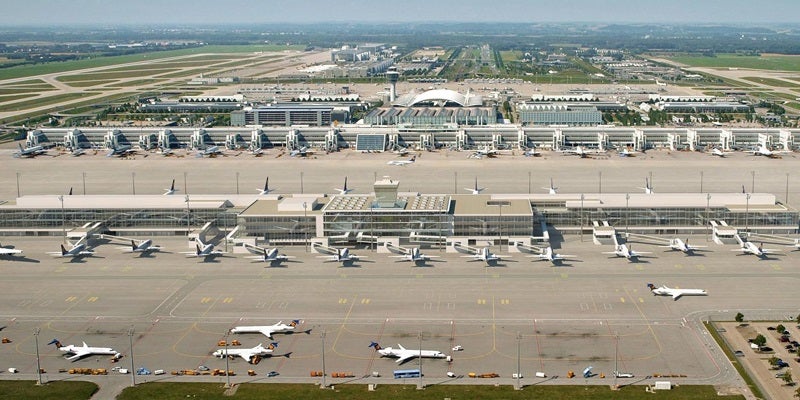 Flughafen München (FMG), the operator of Europe’s only five-star airport, embarked upon an expansion project to meet the growing passenger and traffic needs at Germany’s Munich International Airport.

The first milestone of the expansion project has been met with the launch of new satellite terminal, which is an expansion to the existing Terminal 2, in April 2016. Boasted as Germany’s first midfield terminal, the new facility provides passengers a new level of service, comfort and sustainability.

The expansion will increase the capacity of Terminal 2 by 11 million passengers, enabling it to handle 36 million passengers a year. Similar to Terminal 2, the new satellite terminal is jointly owned and operated by FMG and Lufthansa with 60% and 40% ownership respectively.

Other expansion projects at the airport include the refurbishment of Terminal 1 (T1) and a new third runway construction, which are currently in planning phase.

Operational since 2003, Terminal 2 has consistently exceeded its actual design capacity of 25m passengers, which resulted in the proposal for a supporting structure that enables capacity enhancement and better service offering to the passengers.

Ground for the construction of the satellite terminal was broken in April 2012, while the topping-out ceremony took place in September 2013. The building was completed in late 2015 followed by the operational testing phase, which involved extensive trials with more than 3,000 participants.

Facilities and features in the satellite terminal at Munich airport

The 125,000m² satellite building is located to the east of Terminal 2 on the top of the existing baggage sorting hall on the eastern apron. The airport’s control tower was integrated into the terminal before the start of construction.

The satellite terminal has a length of more than 600m and features 52 departure gates, 39 passenger boarding bridges and 27 aircraft parking locations. Passengers can directly board the aircraft through the terminal gates.

Public cannot access the terminal as it doesn’t have any landside transportation links. Upon completing check-in, passport screening and hand baggage checks in Terminal 2, passengers go aboard a fully-automated personal transportation system (PTS), which serves as an underground link between Terminal 2 and the satellite terminal.

Passengers can shop and eat in 15 retail outlets, seven restaurants and cafes, as well as three duty-free zones in a 7,000m² area located at the centre of the terminal for quick and convenient access.

The entire area reflects the Bavarian lifestyle and Munich’s character. The terminal also features quite areas with reclining chairs, children play areas, changing rooms and showers. Five new Lufthansa lounges, located in an area of 4,000m², with a roof terrace, panoramic windows and a bar overlooking the airport apron, are an added attraction.

Sustainable features of the satellite terminal

The new satellite terminal features clean and green features including advanced building materials, and innovative heating, cooling and lighting technologies. The escalators in the terminal are separated from the rest of the area by a 4.5m-wide glass wall, which acts as a climate buffer for the interior area.

The building’s facade is made of a specially designed glass, which has a special coating that allows only sunlight inside while keeping the heat out.

The aircraft stands incorporate pre-conditioned air (PCA) technology to condition the cabin air in the parked aircraft, eliminating the need for kerosene-fuelled auxiliary power units. Other energy-efficiency features in the terminal include modern displacement ventilation and use of LED lamps and dimming technology.

The PTS connects Terminal 2 with the satellite terminal through an existing 400m tunnel with two stations, which were partially built during the construction of Terminal 2. The PTS uses three driverless, fully-automatic trains, each having four cars, with a passenger carrying capacity of ten, running at a speed of 25km/h.

Through the PTS, passengers can travel between the terminals in less than a minute. The trains will stop at the centre of the satellite building making it convenient for the passengers to reach the flights quickly and easily.

Investment for the terminal expansion

The total investment for the satellite terminal is €900m ($1bn), which also includes costs of baggage sorting facility expansion and the construction work on the ramps and taxiways near the terminal.

While the costs for the satellite building and baggage sorting facility expansions were shared by both the operators on a 60:40 basis, funds for the improvements to the ramp were provided by the airport.

Munich-based Koch+Partner (K+P) Architects provided the design and general planning services for stages 2 to 8 of the new satellite terminal.

The proposed T1 refurbishment is still in the planning phase and will extend the terminal towards the west-end.

It is aimed at significantly enhancing the terminal’s appearance and improving its functionality, while increasing its capacity and the efficiency of passport and security screening and speed-up the baggage claim process. New aircraft positions will be added along with a new central shopping area, as part of the project.

The existing two runway system at the airport, which can handle up to 90 aircraft movements an hour, is facing regular bottlenecks during peak hours for many times a day. The 2025 forecast for the airport indicates increase in passenger traffic to 58m passengers and an increase in the airfreight volumes.

To meet the projected numbers and to maintain the airport’s position in Europe, construction of a new third runway, which could increase the aircrafts movements to 120 an hour, was proposed in 2007.

In 2011, the government of Upper Bavaria issued the zoning approval for the construction of the runway. Dismissing 16 objections raised against the approval, the Bavarian Higher Administrative Court in 2014 announced that the project approved by the government was lawful as it met all the technical and legal requirements.

INFORM
INFORM is a team of raised-in-industry ICT professionals who research,...
SUBSCRIBED