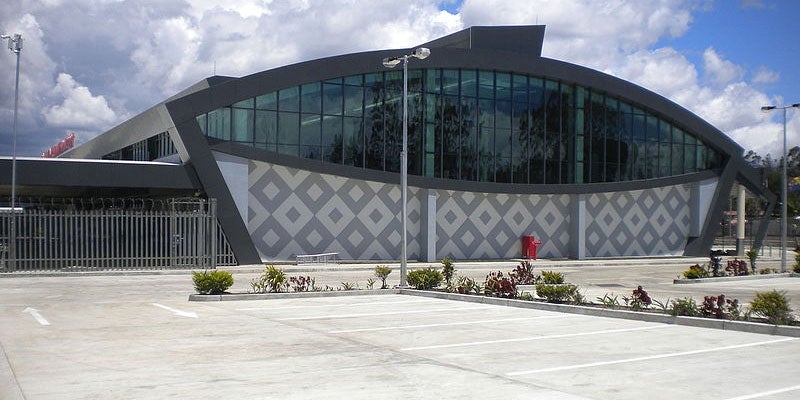 Airport owner and operator National Airports Corporation (NAC) of Papua New Guinea initiated a redevelopment project in 2013. The project is a part of the Civil Aviation Development Investment Program (CADIP), which aims to strengthen the airport’s safety, accessibility and reliability along with 20 other airports in PNG.

It will also enable the airport comply with the international safety standards and expand facilities to accommodate bigger aircraft and more passengers.

Reconstructed as a part of the redevelopment project, the passenger terminal building was opened in November 2015. Reconstructed at a cost of approximately PGK70m ($23m), the terminal upgrade is one of the high-impact infrastructure projects proposed under the CADIP.

Details of the terminal building reconstruction

The terminal reconstruction works commenced in July 2013 and were completed in October 2015. Temporary terminal and cargo facilities were built to allow uninterrupted operations at the airport during the construction period.

The design of the newly constructed terminal is inspired by the Mt. Hagen axe, a local artefact. The exteriors are shaped like the axe and decorated in traditional patterns.

Energy-efficient and eco-friendly systems such as skylights to increase the use of natural light and LED lights to save energy were installed throughout the terminal.

The building has its own sewerage treatment system, which converts the liquid waste into fertiliser after separating it from the solid waste.

The runway redevelopment project includes renovations to the existing runways, mainly focusing on strengthening the existing pavements and widening the runway strip to accommodate bigger aircraft.

The main runway will be extended to 2,300m at the western end, while retaining its width. Full strength asphalt surfaced shoulders of 3m-long will be built on each side of the runway. The runway strip will be widened from 90m to 150m and new lighting system will be installed, which is intended for use in poor weather and light conditions during daytime.

"The terminal upgrade is one of the high-impact infrastructure projects proposed under the CADIP."

All the aircraft movement areas will be laid with dense graded asphalt surfaces, main runway will be grooved, and the pavement markings will be reinstated. The second runway will also be upgraded to match the main one. The PAPI landing aid system at each end of the runway will be adjusted and new access roads will be constructed into the car park.

The airport development project is jointly funded by the Papua New Guinea Government and the Asian Development Bank (ADB). A part of the loan granted has already been used for the new terminal construction and associated works.