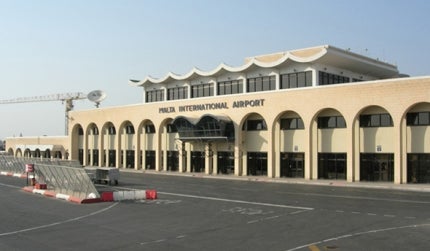 Malta International Airport is the only international airport serving the Republic of Malta in Southern Europe. It is located 5km southwest of Valletta, the Maltese capital and is sometimes referred to as the Luqa Airport or Valletta Airport.

The airport serves as the main hub for Air Malta Airlines, as well as hosting the annual Malta Airshow, which is visited by various European military and civil aircraft.

The history of civil and commercial aviation in Malta dates back to 1920s when seaplanes from England and Italy landed in military bases at Marsascala and Kalafrana. In 1926 Italy’s ALALTTORIA started operating scheduled services to Italy, Malta and Tripoli. With the increase in passenger and aircraft movements, the British government recognised the need for the construction of a terminal.

Planning of the terminal started in 1956 with funding of €0.69m from the British government. Construction of the new passenger terminal was completed in 1958 and consisted of two levels that included a restaurant, a post office, a cable and wireless office, and a balcony for public view.

In October 1977, a new runway was constructed, while refurbishment and extension of the terminal commenced, and arrivals and a VIP lounges were added to the terminal building.

Construction of the present air terminal building started in September 1989 and was completed in February 1992 in a record time of 29 months. The old terminal building was closed upon its opening and later converted into a cargo terminal.

The current terminal building was opened on 7 February 1992. Its construction was partly funded by the Maltese government, as well as through loans from the European Investment Bank and Maltese commercial banks. The building is designed with a capacity to handle five million passengers annually.

The terminal building includes departure and arrival halls on either side of the main building. Spacious check-in counters, welcome halls, cafeterias, restaurants, baggage reclaim areas, tax-free shops for non-EU destinations, retail outlets and other services are installed in both the arrivals and departure halls. The building also comprises of two business class executive lounges and an exclusive VVIP lounge.

The terminal building also features a main car park, a 50,000m² taxi park and a car hire park, as well as a road and pavement network with an area of 40,000m².

A new concessionary of Samsonite stores and a renovated Hard Rock Cafe were opened in the airport terminal in 2009.

The terminal has nine designated aircraft parking areas. Park 1 operates general aviation aircraft, park 2 is for aircraft related to maintenance facilities, parks 3, 5 and 6 can operate small aircraft, and park 7 is exclusively used for the Armed Forces of Malta. Parks 4, 8 and 9 serve as the main parking areas for commercial aircraft.

In June 2009, the third phase of taxiway upgrading was completed. These works were undertaken to ensure that the airfield infrastructure meets the latest ICAO standards. Works on taxiways C and D that connect runway 31/13 to apron 9 started in February 2009. The taxi pavements were extended and repaved, lighting services on the taxiway were also replaced, while the taxiway upgrading project was partly funded under the EU TEN-T programme.

"A new concessionary of Samsonite stores and a renovated Hard Rock Cafe were opened in the airport terminal in 2009."

A 100kW solar farm project consisting of 435 polycrystalline panels was installed at the airport in 2010. The project, executed by ElectrofixEnergy, can produce approximately 165,000 units of electrical power using solar energy, which reduces 145,000kg of CO2 emissions every year and saves €30,000 of the airport’s electricity cost.

A state-of-the-art baggage screening system is installed at the airport that has the capacity to handle 1,500 pieces of luggage every hour. It features ARINC MUSE common check-in system with a baggage reconciliation system.

Jewers Doors
Established in 1983, Jewers Doors is at the forefront of...
SUBSCRIBED