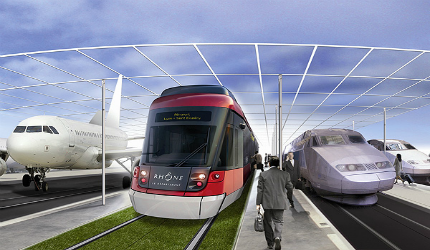 Formerly known as Lyon Satolas Airport, it was renamed in the honour of the French writer and pilot Antoine de Saint-Exupéry, in 2000. The airport has two terminals, designated as Terminal 1 and Terminal 2, and one satellite terminal, Terminal 3, which was opened in November 2011.

Airport owner and operator Aéroport de Lyon has initiated a five-year investment plan worth €260m ($347m) for the airport’s improvement.

The plan enables the airport to meet the growing traffic demands with increased capacity and improved service quality.

The airport saw addition of 16 new aircraft stations in 2013 in order to maintain and increase remote aircraft parking capacity.

The new terminal covers an area of 70,000m2. It is a circular building having three levels and covering 10,000m2 of commercial floor space. The terminal features a wide entrance hall, a hanging garden, a large number of shopping outlets, 4,500m2 of baggage delivery area and 9,000m2 of retail space.

Construction of the Future Terminal project and contractors

Egis conducted the feasibility study for the project. The Future Terminal is designed and constructed by consortium of GFC Construction and Rogers Stirk Harbour + Partners (RSHP). Technip TPS, Cape Ingelec, Chabanne Partners and Inddigo are the consultants for the project.

Other expansions at Lyon-Saint Exupéry Airport

A 10,000m² concourse building was constructed in front of Terminals 1 and 3 by 2016. The parking areas were expanded by creating silo parking lots. Two traffic circles and 3km of access roads will be created near Terminal 3, which are expected to be completed by 2020.

The airport cargo centre covers an area of 50ha. A new 6,000m² building was constructed at the cargo port to house express freight operations. The operations began in October  2017.

A parallel taxiway will be created between runway A and current taxiway. It is expected to be completed by March 2018. It will be 4km-long and 60m-wide.

Operational since August 2010, Rhônexpress provides rail transport services for the passengers at the airport. The service connects TGV rail station of Lyon Part-Dieu with the Gare de Lyon Saint-Exupéry.

The Contournement Ferroviaire Agglomération Lyonnaise (CFAL) project will connect the Lyon-Saint Exupéry Airport to the TER (Regional Express Train) network. It is expected to be completed by 2020.

The CAREX project will create a CAREX freight station at Lyon-Saint Exupéry Airport. It will connect the airport to the European airport hubs via high-speed line network.

A feasibility study was launched for the Euro CAREX project in July 2017 to identify the potential freight volumes and to evaluate the revenue and expenses related to the project. The results of the report will be unveiled by the end of 2017.

The Ligne LGV LYON-TURIN Project will connect the airport to the Lyon-Turin LGV line. It is expected to be completed by 2023.