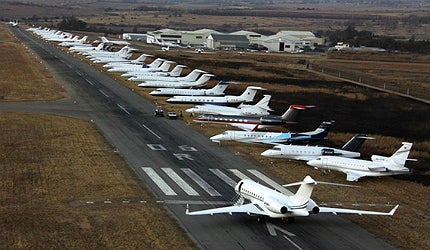 The airport is located in the vicinity of Johannesburg’s major business hub Sandton. It is connected through the R512 road that runs between Randburg and Sandton, two of the wealthiest regions of the city of Johannesburg.

Lanseria is one of the emerging airports in South Africa, growing from a rural airfield to now playing a pivotal role in the country’s aviation industry. It provides a wide variety of services, including charter, domestic and international services.

"Lanseria is one of the emerging airports in South Africa, growing from a rural airfield to now playing a pivotal role."

The airport has the capacity to handle large aircraft such as the Boeing 757-300.

The airport acts as a major hub for Air Botswana, Kulula, Mango and Fly Go-Air airlines. With VIP lounges and excellent business class facilities, the airport is considered as the first choice for businessmen.

In 2012, the airport was sold to a consortium of Harith, a Pan African Infrastructure Development Fund company, Black Economic Empowerment consortium (consortium includes the women’s empowerment company Nozala), the Government Employee Pension Fund (GEPF) and the Public Investment Corporation (PIC). As of 2012, the airport had the capacity to handle approximately 1.5 million passengers a year.

The site of the airport was identified by two aircraft pilots Fanie Haacke and Abe Sher back in 1972. Factors such as connectivity to residential areas, suitable land surface for long runways, good landing approach, extent of smog, identification of smog free zones and open spaces for forced landing were considered during the selection of the site. These factors have proved to be instrumental in the success of the airport.

The municipalities of Krugersdorp and Roodepoort, along with the Transvaal Peri-Urban Board, acquired the site and leased it to the then formed Lanseria Management Company for a period of 99 years. The airport was opened to public in August 1974.

The growth of the airport as a low cost alternative to the OR Tambo International Airport has attracted a varying number of operators, passengers and freight handlers. The existing 27-year old terminal building and the corresponding infrastructure was unable to cope up with the increasing traffic that was experienced. A larger terminal building was, therefore, constructed in 2002. Additionally all the runways and taxiways were renovated.

"The airport acts as a major hub for Air Botswana, Kulula, Mango and Fly Go-Air airlines."

In May 2010, the domestic departure lounge was expanded and renovated, so as to accommodate increasing airline demands and passenger traffic. New retail outlets, restaurants and parking facilities were added to the existing infrastructure.

Plans for construction of a new runway at the airport were announced in March 2012. The new runway will be three kilometres long and 45m wide. It is expected to cost $16.92m (R150m). As of January 2013, construction of the runway is underway but the official date of completion has not been declared.

Several infrastructural improvement projects, such as a new multistorey parking lot, a new hotel, installation of new navigational equipment, upgrading the current lighting system and installation of advanced security systems are under consideration.

Proposals for construction of a new large domestic terminal for handling low cost airlines and a new 200m-long pier are also being considered. A runway extension to increase its potential to handle aircrafts such as A300s and B767s is also under the scanner.

The air traffic control and navigation of the airport is managed by the Air Traffic and Navigation Services Africa (ATNS). Navigation is controlled by VOR/DME and ILS systems. The ATC tower works at a frequency of 124MHz with the ground frequency fixed at 121.65MHz. The services involving apron work on 122.85MHz frequency.

Lanseria International Airport’s parking lot is located close to the main terminal and has 2,187 parking spaces. Disabled parking facilities are also available at the airport.