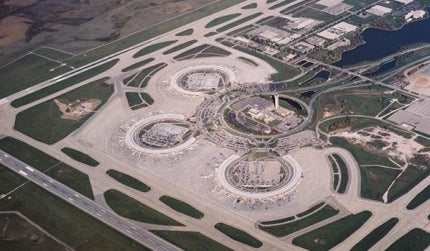 Kansas City International Airport (KCI) is a public airport which serves the city of Kansas, Missouri, in the United States. Opened in 1972, the airport is rated as one of the most convenient commercial airports of the world. It is congestion free, provides easy terminal access, and has fewer flight delays.

The airport is owned and operated by Kansas City Aviation Department. It spans an area of 10,000 acres and has capacity to handle up to 139 aircraft every hour. In 2011, the airport handled around ten million passengers. The IATA code of the airport, MCI, comes from its original name, Mid-Continent International Airport.

"The airport is owned and operated by Kansas City Aviation Department."

The terminal was designed to reduce infrastructure cost by eliminating the use of people movers. Airport buses are used instead of people movers to take passengers around the airport.

A plan to merge the three terminals into one central terminal was proposed by the airport authorities in the master plan formulated in December 2007. The proposal was made due to the rising expenses of operating three security checkpoints at each terminal. Lack of retail space beyond the security check also adds to the operating costs at the terminal.

The central terminal, expected to be completed by 2025, is planned to be built in a vacant area located south of the airfield.

Wichita Mid-Continent Airport is a busy commercial airport situated in the heart of the mid-west of the US. The airport is south-west of the city of Witchita in Sedgewick County, Kansas, and is the state’s busiest airport (it hosted 1.6m passengers in 2007 and 1.4m in 2006) next to Kansas City International.

A terminal improvement project was completed at the airport in November 2004. The $258m project started in March 2001 with design firm 360 Architecture as the lead contractor.

A parking lot and a bus operation facility were opened at the airport in August 2003. A $13.5m Synchronous Optical NETwork was installed as a new information technology system at Kansas International Airport in 2004. Updated flight information systems, new terrazzo floors, HVAC system, baggage claim devices and ground transportation kiosks were also installed. A new 15,000 capacity economic parking lot was opened at the airport in January 2004, which replaced the existing Satellite Parking Lot.

These expansions delivered a fresh-looking modern airport with wider concourses, brighter retail stores and a large number of dining options.

The first phase of a $3.5m taxiway improvement project started in October 2011. It includes pavement improvements and rehabilitation of airfield lighting circuits, lighting fixtures and signs of taxiways F, K and G.

A master plan for building an integrated logistics and warehousing facility known as the KCI Intermodal Business Centre was announced by the Kansas City Aviation Department and Dallas-based Trammell Crow Company in June 2007. The 690-acre multi-use phased development will offer 5.4 million square feet of buildings upon completion, for logistics, air cargo storage, office, warehousing and light manufacturing facilities. The air cargo and air freight facilities will be built adjoining the runways.

"The IATA code of the airport, MCI, comes from its original name, Mid-Continent International Airport."

The first phase of development will include 1.8 million square feet of space in approximately 180 acres. The entire project is expected to cost more than $216m. It is expected to make the airport a Foreign Trade Zone. Construction on the first building of the project was started by Blount International in July 2011.

The airport has three runways. Runway 01L/19R is 10,801ft long and 150ft wide. It is made of concrete and equipped with High Intensity Runway Lights (HIRL) and MALSF/ALSF2 Approach lights.

Runway 01R/19L is 9,500ft long and 150ft wide. It is paved with concrete and equipped with HIRK runway lights and ALSF2/MALSR approach lights.

Runway 09/27 is also 9,500ft long and 150ft wide. It is asphalt-paved and equipped with HIRL Runway Lights and MALSR/MALSR approach lights.