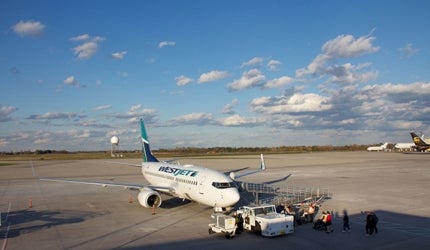 John C Munro Hamilton International Airport is located in Hamilton, Southern Ontario, Canada. The airport, named after one of the city’s prominent leaders John Carr Munro, served as a wartime air force base when it was constructed in the 1940s. It opened to the public as a civil airport after World War II.

John C Munro Hamilton International Airport is currently operated by TradePort International Corporation, which has a 40-year lease agreement up to 2036 with the city of Hamilton and is responsible for the management and development of the airport.

Various development projects were completed at the airport in 2010-2011, including the widening of Taxiway Delta by 5m to make it compatible with larger aircrafts, phase II of the terminal roof reconstruction, repairs to the apron and airfield pavement, as well as a fully automated "autopay" system at the car park for passenger convenience.

A $38m cargo development was planned in January 2011, including a $6m expansion of cargo apron and taxiways, a new multi-tenant cargo facility worth $12m and runway extensions for $20m.

"John C Munro Hamilton International Airport is currently operated by TradePort International Corporation, which has a 40-year lease agreement up to 2036 with the city of Hamilton and is responsible for the management and development of the airport."

The airport’s master plan was formulated and published in 2010. It aims to make the airport an alternate passenger entry to the Southern Ontario region and the main freighter gateway in Canada.

The master plan suggested expansion of the passenger terminal in three phases to increase its handling capacity to 1.5 million passengers per annum by 2027. The expansion is currently in progress.

The master plan also includes the resurfacing of runway 12/30, refurbishment of runway 06/24, installation of omni-directional approach lighting system on runway 06, enlargement of taxiway delta and the building of a new taxiway to the east of Apron III for commercial expansions between 2011 and 2015.

Proposals for improvements beyond 2021 include enlargement of Taxiway Whisky for cargo developments, construction of a new runway to the west of runway 06/24, implementation of high-speed exit sections on the existing runways and the enlargement of runway 12/30 to 3,353m.

The terminal consists of an outbound baggage area and two baggage claim areas of 476m² and 381m² for domestic and international passengers respectively. The baggage area was renovated in 2006, while the hold room and CBSA administration areas were improved in Phase I of the terminal expansion.

Phase II includes a bi-level expansion to the north of the terminal and a 5,000m² baggage handling claim area, which will be developed by relocating the hold rooms to the second level.

Phase III of the project includes the development of check-in, passenger screening areas, baggage handling areas and international passenger arrival gates. These expansions will add an area of 17,275m² to the terminal building.

A $60m fourth phase of terminal expansion is under consideration. TradePort had requested the city authorities to support the project by funding $98m, however authorities indicated that the funding request was two large and the project is being planned to be developed into two phases.

The master plan also proposes improvements in ground transport facilities to the airport, with planning underway to link the airport with a light transit transport system to the city. The first phase of this project is expected to be operational by 2015, with the whole project finished in 15 years. A rapid transit light railway station will also be constructed adjacent to the passenger terminal.