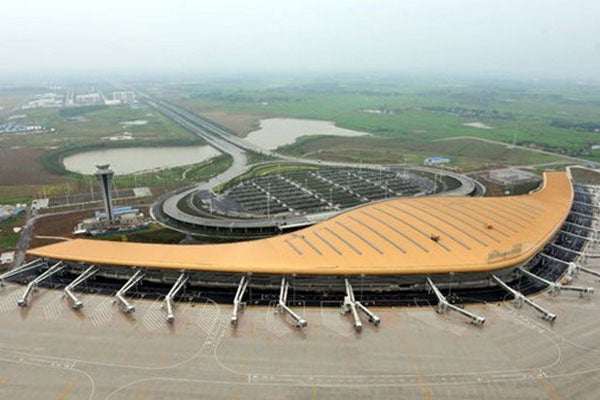 The newly-constructed Hefei Xinqiao International Airport located at Hefei, capital of the Anhui Province of Eastern China, commenced operations in May 2013. The airport will serve as a replacement for Luogang Airport, which has been the primary airport of the city for more than three decades. All operations at Luogang Airport were stopped almost immediately after the inauguration of Hefei Xinqiao International.

Hefei Xinqiao International Airport will introduce 12 new flight services, in addition to the 58 services shifted from Luogang Airport. Out of the 70 flight services, ten are overseas. It is expected to handle 11 million passengers and 150,000t of cargo per annum by 2020.

"The airport will serve as a replacement for Luogang Airport."

The Hefei Xinqiao International Airport project was initially planned in 2005, with construction starting in 2008. The duration from identifying the site to execution of the initial phase was approximately eight years.

The airport is expected to handle 60 million passengers upon completion of the second and third phases of construction.

The first phase of construction principally involved three elements, which include the terminal building, airfield and operation zone. The lighting systems at the airfield were deployed in October 2012, while construction of the runway was competed a month later.

Hefei Xinqiao International Airport currently has a single runway, which was built as part of the initial phase of construction. The construction of the runway was completed in November 2012.

Located 13km west of downtown Shanghai, Shanghai Hongqiao International Airport is China’s first civilian airport. The airport became one of three international air transit centres in China after a series of renovations. It is owned and operated by the Shanghai Airport Authority.

The length and width of the runway are 3,400m and 45m respectively. The runway facilitates take-off and landing of all medium and big-size aircraft, barring A380s.

A taxiway has also been constructed parallel to the runway, with the same length as that of the runway.

The most challenging part of the Hefei Xinqiao International Airport project was the construction of the terminal building. The building had to be built to be energy efficient and eco-friendly, while simultaneously addressing the aspect of safety.

The terminal building is 800m long and 160m wide, and includes two floors above the ground, one floor underground and a mezzanine floor.

The design of the new terminal resembles that of a tropical fish, from a bird’s eye view. The terminal is divided into two zones, northern and southern. The northern zone includes passenger space facilitating arrivals and departures. The southern zone provides an access path for the aircraft.

The ceiling of the terminal building is insulated against heat, water and noise. Hunter Douglas supplied a variety of its insulation panels for the making of the ceiling, such as curved panel 180, Luxalon linear panel 180 and corrugated panel.

The bridge surface is made up of composite beams of mixed steel by applying cast-in-situ concrete bridge panel with girder, beam and small girder.

Brand-Rex supplied 275km of Cat6Plus unshielded twisted pair (UTP) cable and more than 10,000 UTP tool-free jacks for the airport project. The cable and jacks enabled the creation of around 9,000 ports throughout the domestic airport hub and the passenger terminal.