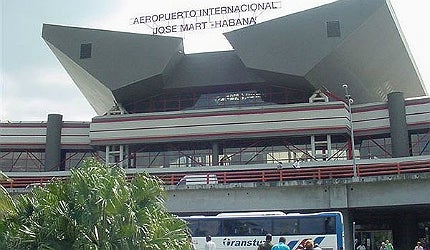 Jose Marti International Airport is the main gateway into Cuba from the rest of the world. It is located in Boyeros, about 15km south-west of Havana – the capital city of Cuba.

"Terminal two was constructed at the airport in 1988 to attract United States charter flights."

The airport was previously called Rancho-Boyeros Airport and was later renamed in memory of the Cuban patriot and poet Jose Marti.

It is the largest and busiest airport in Cuba serving four million passengers a year.

It handles more than 25 international airlines and is the hub for the Cubana de Aviacion, Aerogaviota and AeroCaribbean airlines.

Columbia Airfield was the first airport operating flights to Havana. In 1930 the airfield was replaced with the current airport.

The construction of the airport started in 1929. It was opened officially in February 1930, replacing the old airfield.

Terminal two was constructed at the airport in 1988 to attract United States charter flights.

Special charted flights service operating from Miami for Cuba citizens in the US was sanctioned by the US Government during the 1990s.

Guararapes International Airport is the airport serving the port city of Recife in Brazil.

The airport has four terminals, in which T1 is dedicated to domestic operations, T2 and T3 are for international operations and the fourth terminal (T5) is for local airlines operating from Cuba.

Terminal one, which is located on the west side of runway six, was previously used as an international terminal. It is currently being used for domestic operations. Cubana de Aviacion, Aerogaviota and AeroCaribbean operate the majority of the flights from this terminal.

Terminal two handles international licensed charters from Miami, New York and Los Angeles. It lies in the north of the airport ahead of runway 24. Gulfstream Air Charters, Marazul Charters, C&T Charters and ABC Charters operate charted flights from this terminal.

Constructed in 1988, the terminal underwent a major renovation in 2010. It has bars, book shops, a restaurant and car rental services at the arrivals area.

The terminal has car rental facilities outside arrivals, some bars and restaurants which are open 24 hours a day, a bank and a post office. It can accommodate 750 vehicles in its parking lot.

Terminal 5, also called Aerocaribbean terminal, serves the flights of Aero Caribbean Airlines. Aerotaxi, a Cuban based charter flight provider, also operates charter flights from this terminal. A bus service is provided between the terminals for the movement of passengers.

Cargo terminal operations at IATA: HAV

The terminal is 2,000 cubic metres in volume and has a capacity to store 600t. It features two refrigeration and freezing chambers with humidity and gas controls. The airport has one runway (06/24) which is 4,000m in length.

A passenger service operating between Moscow-Frankfurt-Lisbon-Havana crashed at the airport on 27 May 1977, killing 68 people. It was one of the deadliest accidents in the country’s history. The incident was named as the Aeroflot Ilyushin 62 crash.

An international flight to Germany crashed after its take-off from the airport on 3 September 1989 killing 115 passengers, 11 crew members and 45 persons on the ground.