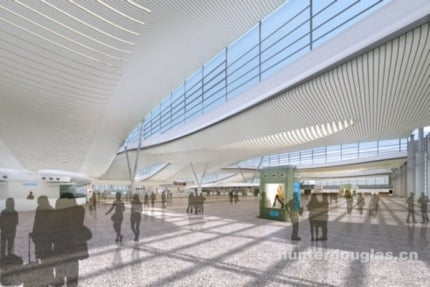 Hangzhou Xiaoshan International Airport (IATA code: HGH) is the tenth busiest airport in China when it comes to traffic. The airport is located 27km away from Hangzhou, the capital of Zhejiang Province, China.

Hangzhou Jianqiao Airport was replaced with Hangzhou Xiaoshan International Airport (HXIA), which was initially used for civil and military services. The construction of Hangzhou Xiaoshan airport started in July 1997 and was completed in 2000. It became an international airport in March 2004, with the construction of immigration and customs facilities.

The airport is home to 38 airline companies providing flights to 58 cities in mainland China, and the Hong Kong and Macao regions, as well as East Asia and Southeast Asia, including eight international and regional cities.

A $1.4bn expansion of the airport was completed in December 2012. The project was executed in two stages.

Stage one included the construction of a 96,000m² (1.03 million ft)² international terminal. The terminal construction was finished in 2010.

The second stage of the expansion started in November 2007 and was completed in December 2012. It included the construction of a 196,000m² (2.1 million ft²) domestic terminal and a new runway.

The airport is equipped with large screens to display the flight information and 12 electric systems. The waiting area has 2,900 seats for passengers and waiting rooms for VIPs.

The airport also has 16 escalators and nine elevators. The aircraft fuel depot can store 20,000m³ of fuel.

The luggage checking system is equipped with some of the world’s most advanced sorting and conveying equipment.

The airport has a taxi stand, car rental services and bus terminals. The parking lots P1 and P2 located in front of the terminal offer 1,300 spaces. Other parking areas include P3, P4, and underground parking, which together offer 2,500 lots.

"The terminal construction was finished in 2010."

Hunter Douglas Architecture supplied its Luxalon products, which included 180 perforated sound-absorbing panels and custom-built screens for the ceiling of the new terminal building. The contract was awarded in November 2009.

Future plans for the HXIA

The airport will have a FedEx courier centre. The centre will include a 60,000m² (645,834ft²) sorting centre and an additional 26 apron slots. It will also have auxiliary facilities covering 148.26 acres of land.

The airport authorities are also planning to increase the length of the runways and expand the terminals with additional facilities. The plan for construction of two new runways is also underway. The new runways will accommodate all types of aircraft. The total terminal area is expected to be increased by 570,000m² (6.13 million ft²) and the cargo warehouse area by 380,000m² (4.09 million ft²).