Expand
The dual-level roadway, also known as Elevated Departure Roadway (EDR), is 1,200ft long.
The new ticket lobby at the terminal is equipped with Common Use Passenger Processing System (CUPPS).
The expansion of the terminal 2 at San Diego International Airport has added 12 additional security lanes.
A new expanded transit centre for buses, shuttles and taxiways was also constructed at the Green Build Terminal.
The Connectocracy, located inside and outside the USO, is used to communicate the themes of individuality, community and connectivity.
The Green Build terminal features a 2.5-story glass hall known as Sunset Cove. Image courtesy of San Diego County Regional Airport Authority.
The Green Build expansion project added an area of 460,000 square feet at the terminal 2 of San Diego international airport. Image courtesy of San Diego County Regional Airport Authority. 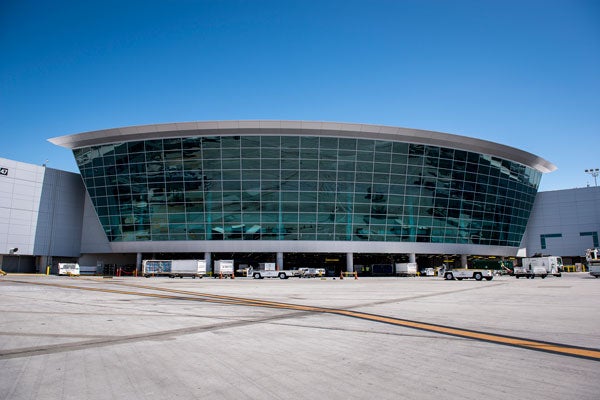 Construction of the $907m Green Build project started in July 2009 and was completed in August 2013. The project created 1,000 jobs during construction.

The airport handled 17.3 million passengers in 2012. The new terminal is expected to increase the passenger traffic from 27 to 33 million by 2030.

"The project created 1,000 jobs during construction."

An enhanced curbside check-in facility was installed at the terminal during expansion. The facility serves as a centre point for passengers to print boarding passes, check baggage and view gate information. The expansion of terminal 2 has added a 9,200ft² concession area and additional security lanes.

The terminal features a new 25,000ft² ticket lobby with 32 check-in counters and ten self-service kiosks. The ticket lobby is equipped with a Common Use Passenger Processing System (CUPPS).

The terminal also features a 2.5-story, 300ft-long glass hall called Sunset Cove, which serves as a waiting area for passengers. It is also used as a viewpoint to the airfield and Point Loma, a seaside community in San Diego.

The seats at the waiting area of the terminal are integrated with power outlets and USB ports.

Facilities at the Green Build Terminal

The terminal features low-flow fixtures, and a reflective roof that absorbs less heat and keeps the terminal cool. The solar panels installed at the terminal will annually produce 2kW of energy.

The construction waste material was recycled and reused.

The sustainability initiatives at the Green Build terminal continued with San Diego County Regional Airport Authority partnering with Borrego Solar Systems in March 2014 to equip the terminal with a 3.3MW solar system over its roof and in a portion of the short-term parking area adjacent to the terminal. The solar panel installation will be completed in late 2014.

A consortium of Turner Construction Company, PCL Construction Services and Flatiron received a $460m design and build contract for the expansion of Terminal 2. The scope of the contract included the construction of the new jet gates, additional dining and shopping facilities and airfield improvements at the terminal.

Flatiron served as the construction manager for the airside portion (new jet gates) of the contract.

The contract also included the construction of a ticket lobby, airline check-in facilities, a new taxiway and jet parking, as well as the installation of security screening systems, baggage handling systems, and the expansion of seating areas, concessions and support space.

URS Corporation was the lead designer for the project. HNTB was the main architect, and Tucker Sadler and Associates was the local architect.

A joint venture of Kiewit Infrastructure West and Sundt Construction received a $227m landside improvements contract as part of the project. The contract included construction of a dual-level roadway known as Elevated Departure Roadway (EDR). A new expanded transit centre for buses, shuttles and taxiways was also constructed.

The total of the terminal project was $907m, which included $820m of construction cost and $87m of financing cost.