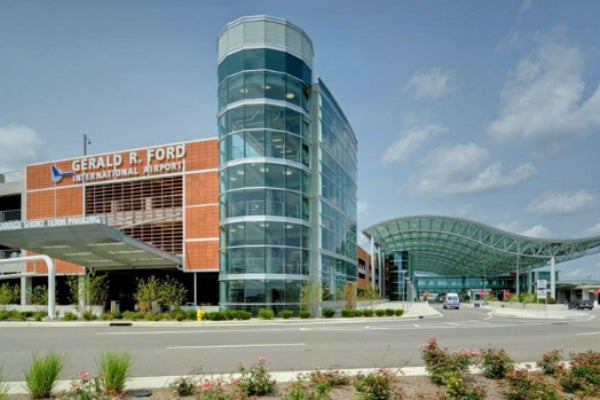 Gerald R. Ford International Airport (GFIA), the second busiest airport in Michigan, is located approximately 13mi (21km) southeast of Grand Rapids, the biggest city in West Michigan, US. The airport is managed and operated by the Kent County Department of Aeronautics.

Earlier known as Kent County International Airport, it was re-named in 1999 in honour of Gerald. R. Ford, the 38th President of US, who served West Michigan as a US Congressman.

In 2014, the airport recorded an all-time passenger record by serving more than 2.33m passengers. It handled more than 75,000 aircraft operations and 82m pounds of cargo in the same year.

The airport offers non-stop service to 22 major destinations with 120 daily non-stop flights. It generates annual revenue of more than $3.1bn in West Michigan and employs more than 1,500 people.

The airport recently completed runway and concourse renovations, and launched construction of a fixed base operations terminal facility to improve facilities for passengers and operators.

Gerald R. Ford international airport features a single terminal comprising of two levels. Level one opens to two concourses, A and B, which have seven gates each for arrivals and departures.

Concourse A has gates designated from A1 to A7 and features a security check point, food and beverage outlets, help centre, ATM, news and gift store, flight information desk and family assist rooms. Concourse B has gates from B1 to B7 and features similar facilities to Concourse A.

The GFIA’s Capital Improvement Plan (CIP), which will include projects from 2015 through 2020 with a total investment of $95m, was approved by the airport Board in October 2014.

The third runway, 8L/26R, was recently reconstructed by replacing its degraded surface. The runway, towards the north of the terminal building, was originally developed to accommodate smaller general aviation and flight training activities. The continued growth of the flight training programme at West Michigan Aviation academy deteriorated its condition over the years.

The reconstruction project, which began in June 2015, included more than 57,000yd³ of excavation and 14,000t of asphalt and was completed in October. The renovated runway has the ability to provide high-quality training to next-generation aviators.

The Detroit Metro Airport in Wayne County, Michigan, is still undergoing a further round of reconstruction and redevelopment.

Parking at the airport is a four-level concrete structure with more than 4,000 parking spaces. It features a 600ft-long, 200ft-wide and 55ft-high curved glass canopy that joins the parking building with the terminal. The roof is covered with curtain wall, terra cotta panels and precast panels.

Landmark broke ground for a new fixed base operations (FBO) terminal facility at the airport in October 2015. The new facility will be located on a 16.8-acre site and includes construction of a 23,750ft² terminal and an 18,750ft² hangar constructed of pre-engineered steel. A 5,000ft² office space will be built adjacent to the hangar.

The FBO terminal will include a two-storey atrium to allow natural lighting and will be built using eco-friendly materials. Construction of the FBO is expected to be completed by summer 2016.

Construction partners for the project include Owen-Ames-Kimball as the construction manager, Prein & Newhof as the geotechnical engineer, and Butler Manufacturing serving as pre-engineering builders.

The architectural and design contract was awarded to Rivers & Christian, Tammy Edmonds Design and CHA.