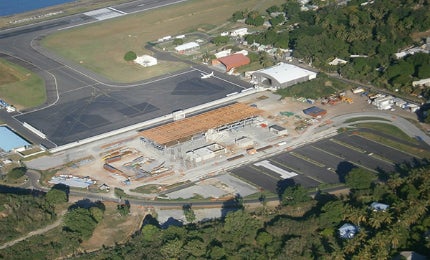 Dzaoudzi Pamandzi International Airport, located in Dzaoudzi on the southern tip of Pamanzi Island, is the only airport in Mayotte. It is the primary gateway to the island and is the eighth biggest overseas airport, offering scheduled flights to 14 direct destinations.

The airport is operated and managed by SNC-Lavalin, under a 15-year long-term contract which was signed with the French Government in 2011. The contractual scope also includes the airport expansion and infrastructure development to accommodate larger aircraft.

Passenger traffic at the facility has increased from 150,000 in 2003 to approximately 350,000 passengers in 2013 – recording a significant growth year over year.

A new terminal was officially opened in August 2014 to handle the increasing passenger traffic. This was built by SNC-Lavalin under a turnkey contract with the Mayotte airport management company.

A new passenger terminal was inaugurated at the airport on 2 April 2013, built at a cost of approximately $118m.

The new terminal is a two-level building encompassing 7,800m² of area. Its construction began in May 2012 with operations commencing in May this year. The old 1,250m² terminal was converted into office space.

The two levels of the terminal are designed for optimal passenger handling and comfort and are connected by escalators and elevators. A capacity of 600,000 passengers a year can travel via the new terminal. This could be expanded to accommodate 1.2 million passengers in future.

Features of the new building include world-class landscaping, which takes its inspiration from local architecture. This includes roofs and floor made out of wood. The terminal is spaciously designed with vast covered areas protected from sun and rain, making it an inviting and user-friendly space. It also features a shopping area, restaurants and provides free Wi-Fi services for passengers to use throughout the terminal.

In addition to the manufacture of the air terminal, the project also included the construction of air traffic infrastructure and expansion of the main parking lot. More parking developments are currently underway.

The new terminal was designed and developed by SNC-Lavalin Group, a design and construction company based in Montreal. Architectural design was provided by the consortium of DRLW (Strasbourg), REC (Toulouse) and AMA (Mayotte). More than 250,000 work hours were spent on the construction site, which involved 90 subcontractors. Approximately 60% of the work was carried out by Mahoran companies.

The total estimated investment of the project was $46.5m, $10m of which was contributed by the State and the remaining by SNC-Lavalin.

"More than 250,000 work hours were spent on the construction site, which involved 90 subcontractors."

The new terminal was designed to meet the latest environmental standards. Bioclimatic solutions are a part of terminal design and materials such as wood, local stone and concrete were used in the construction to help reduce the energy consumption by 40% compared to a typical air terminal.

Rainwater catchment tanks also feature at the terminal. These collect rainwater, which is then sent to the restrooms. Solar energy is also used to heat the water. Only the departure lounges have air conditioning facilities, with the rest of the building naturally ventilated thanks to its optimised facade and roof design.

The airport has a single asphalt-covered runway, which is 1,930m long and 45m wide.

a total of three hundred parking spacing are offered aty the airport with the first 20 minutes being free of charge. There are also 20 spaces for drop-off parking which are located close to the terminal for easy pick-up of the passengers and luggage.