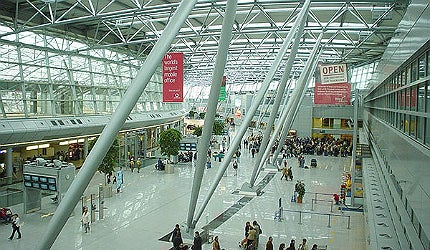 In 2009 the airport won ‘Best Cargo Airport’ in the category of freight handling up to 100,000 tons a year, by the leading professional magazine Air Cargo News. It also won the Skytrax World Airport Award in the category ‘Airport Staff Service Excellence Europe’ in 2011.

A business park called Airport City was planned at the south-west of the airport’s terminal in 2005. It will be spread across a 23ha area. The airport’s subsidiary Flughafen Immobilien bought the ownership and is responsible for the design and development of the project.

The airport has a terminal capacity of 22 million passengers. The terminal building has 36,000 square metres of check-in areas, with 142 check-in counters and two SkyTrain stations. It has three piers, A, B and C, with 27 passenger bridges.

The terminal features a 100% multistage baggage check, with two baggage sorting halls. The halls contain 19 carousels which can handle a total of 10,000 baggage items each hour.

Previous Düsseldorf expansions and airport 2000 plus

"The airport 2000 plus project was declared complete with the opening of Terminal C in May 2003. The terminal was built at a cost of €40m."

The airport’s passenger traffic in 1995 exceeded the design capacity of 14 million passengers per annum. The terminal building was also contaminated with fire in the year which followed. These developments necessitated immediate expansion of the airport facilities, including those of the passenger terminal. A project, named airport 2000 plus, was launched consequently.

Airport 2000 plus is the biggest investment project in the history of the airport. It included replacement of the old passenger terminal with a new terminal building C, construction of a modern check-in area that links concourses A, B and C, building of a new railway station and SkyTrain, installation of an Automated People Mover and the renovation of existing concourses. The total cost of the project was estimated at €800m.

The airport 2000 plus project was declared complete with the opening of Terminal C in May 2003. The terminal was built at a cost of €40m.

A connecting passageway between piers B and C was built in December 2008. A 50 square metre smokers’ lounge is located near the security area of pier C. The VIP Lounge in the airport was modernised in 2009.

Construction of the railway station began in 1997 and was completed by May 2000. Parking garage one was demolished and reconstruction work on central terminal building and Concourse B was started after opening the newly constructed Concourse A in 1998.

Construction works on Terminal A/B, Concourse B and the parking garage were started in 1999. The same year marked the ground breaking of the new terminal.

Parking Garage P1, Terminal A/B and Concourse B were opened in 2001. The new main terminal, which is triple the size of the old terminal building, connects the existing terminals, A and C.

The central terminal in front of Concourse A was opened for operation in March 2002. SkyTrain connecting the railway station to the airport terminals was inaugurated in July 2002.

A new baggage handling system connecting the three terminals, A, B and C, is being installed at the new terminal by Crisplant.

Runways and parking at the German airport

The airport has approximately 20,000 parking spaces with options for long-term parking and short-term parking. Parking lot P7 and its twin building, which serves as a car rental centre, were opened in 2009.