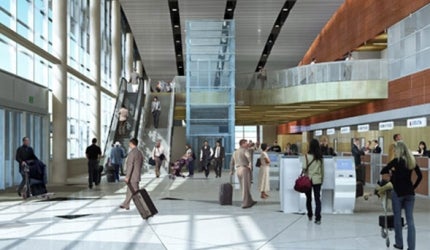 The new terminal at Duluth International Airport, located in St. Louis County, Minnesota, US, began operations in January 2013, following the $78m terminal reconstruction project, which started in September 2009. The airport continued to function normally throughout the construction phase.

The new terminal is of same size as its predecessor, but has been designed to make optimal use of the available space. Its design was inspired by local materials, forms and landscaping.

"The airport continued to function normally throughout the construction phase."

Contracts were awarded to more than 90 companies as part of the terminal reconstruction project, which led to generation of over 300 construction jobs.

The newly constructed terminal conforms to all the federal safety and security specifications. It has also been awarded LEED-Silver certification owing to the facility’s green energy initiatives, such as the inclusion of geothermal systems and efficient water system.

The space resulting from the demolition of the old facility will be used to park aircraft at the new terminal. This will facilitate simultaneous parking of four passenger jets.

Duluth International Airport witnessed a 75% rise in passenger traffic since the opening of the original terminal in 1974. The average annual passenger traffic at the airport is approximately 300,000, which the old terminal was unable to handle.

Minneapolis-St Paul (MSP) International Airport lies between Minneapolis and St Paul and serves suburban areas such as Bloomington, Eagan, Mendota Heights and Richfield in the US state of Minnesota. It is operated by Metropolitan Airports Commission (MAC).

Security requirements following 9/11 resulted in the terminal becoming more congested than ever. Passengers previously had the choice of waiting either at the lounge or the restaurant at the second level. Additionally, the old terminal did not have any toilets after passengers went through the security check. It was then decided by the authorities that construction of a new terminal would be the only viable solution.

The new terminal building at Duluth International Airport has three floors, and is fortified by the lateral-load resistance system. The entrance includes a big pavilion with double cantilevered corners and a curved roof, providing a sheltered passenger waiting area. The new terminal has a provision for both further expansion to the east and west, and construction of a vertical storey at specific points.

The newly constructed building includes several lanes for pickup and drop-off, and a separate lane for commercial vehicles. The new terminal includes two main levels, which are linked by elevators, escalators and stairs.

The waiting area of the new terminal accommodates 400 passengers, and provides numerous amenities such as TVs, Wi-Fi and a restaurant. The new terminal also has two baggage carousels, which enable travellers to access their luggage without delay.

The reconstructed Duluth International Airport includes a geothermal cooling and heating system. The system was built through a VALE (Voluntary Airport Low Emissions) grant provided by the FAA (Federal Aviation Administration). Duluth Airport is among the first few airports of Minnesota to have secured the VALE grant. The grant is meant to encourage projects aimed at improving air quality at commercial service airports.

"The space resulting from the demolition of the old facility will be used to park aircraft at the new terminal."

The systems deployed include approximately 80 geothermal wells, which supply for 75% of the heating requirement of the airport. The geothermal systems also take care of the entire cooling needs of the airport. Heat transfer liquid is pumped through the wells with the help of piping arranged in the wells.

The geothermal systems will result in cost savings of approximately $30,000, when compared with conventional cooling and heating systems.

Funding for the new terminal project at Duluth Airport

The project was funded through federal grants and state bonds. In addition, the Federal Aviation Administration provided $5m towards the project.

Reynolds, Smith and Hills designed the new terminal, in association with TKDA. The contract for the management of construction operations was awarded to Kraus Anderson Construction Company.