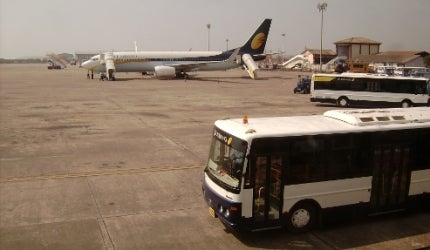 Dabolim International Airport is a civil and military airport located in Dabolim, a village located 4km from Vasco da Gama in Goa, India. The airport is located 30km from Panaji, the state’s capital. It is spread across an area of 702ha and serves Goa and Vasco da Gama.

A new airport is planned to be built at Mopa in northern part of Goa to decrease traffic congestion in Dabolim Airport. The proposal to build the new public airport was also taken because the joint usage of Dabolim Airport for Navy and civilian is limiting its operations.

The airport has a domestic and an international terminal. The domestic terminal was constructed in 1983 and covers an area of 2,000m² (21,527ft²). It has a capacity to handle 350 arrival and departure passengers at a time.

The international terminal, which was built in 1996, covers an area of 1,000m² (10,763ft²). It has a capacity to handle 250 arrival and departure passengers simultaneously.

A new integrated terminal facilitating domestic and international services was opened in 2013 as part of an expansion of the airport facilities.

A new 61,957m² (666,900ft²) integrated terminal facility and several other expansions were planned in order to reduce the congestion at the passenger terminal. The foundation stone for the project was laid in 2009. The project includes the construction of passenger and cargo terminals, and parallel taxiways.

An investment of over INR 3.45bn ($56m) was made on the new integrated terminal while over INR 5bn ($81.4m) is being invested in allied work at the airport. A further $6.5m worth terminal expansion is approved on the western side of the building to enhance the passenger capacity. Three more passenger boarding bridges will be added as part of the expansion.

The in line compatible baggage handling system, substation and other services are located in the basement of the building.

The terminal is built up in an area of 63,913m2 and features a multi-level car-parking facility that can accommodate up to 570 cars. The building can handle 3.2 million domestic passengers and 800,000 international passengers. Access to different levels of the terminal is facilitated by 15 elevators and 12 escalators.

Consolidated Construction Consortium, a company based in Chennai, was awarded the construction contract for the expansion. Construction started in May 2011 and was finished in 2013.

Dabolim airport has a single runway (8/26) of 2,390m length. It is asphalt-surfaced and can accommodate Boeing 747 aircraft.

Other airport systems and infrastructure at Dabolim International

"Dabolim International Airport was constructed by the Government of the Estado da Índia Portuguesa."

The airport lacks a fuel firm and parking hangars, which will require an area of 50,000m² (538,196ft²) to 60,000m² (645,834ft²). The government is currently negotiating with the Navy authorities on issuing the required land to establish these facilities.

An underground cable linking the airport to the Sancoale power substation was laid with an investment of INR 20m ($365,730), in order to provide uninterrupted power supply to the airport. An advanced sewerage treatment plant was also commissioned at the airport as part of the recent expansion.