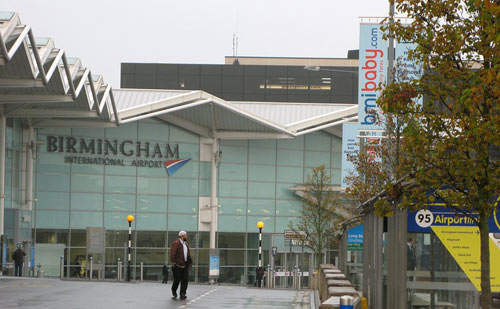 Like most UK airports, security considerations have removed vehicle traffic from outside of Birmingham International terminal buildings. 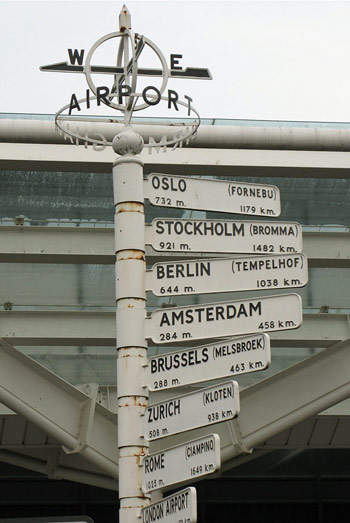 Birmingham International (BIA) has origins in the late 1930s. 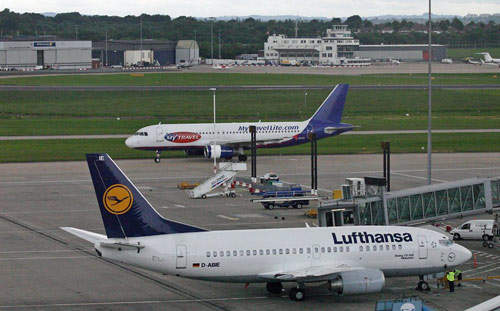 The original passenger facilities at Birmingham Airport were on the opposite side of the runway from the present terminals. 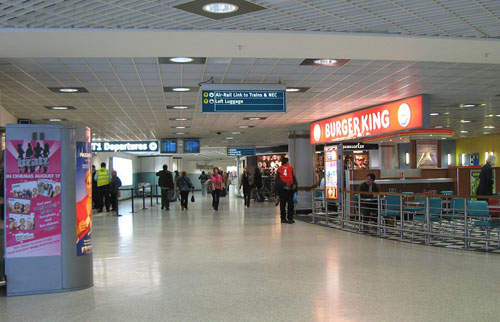 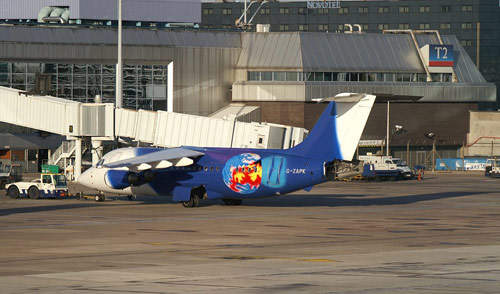 BIA expansion plans include extending from this end of terminal two. 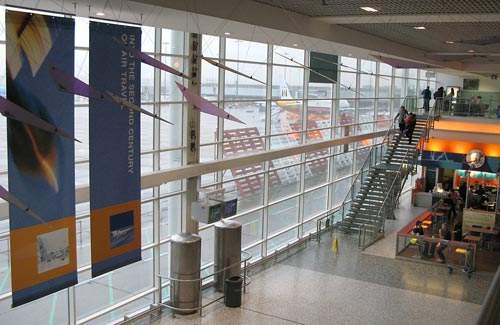 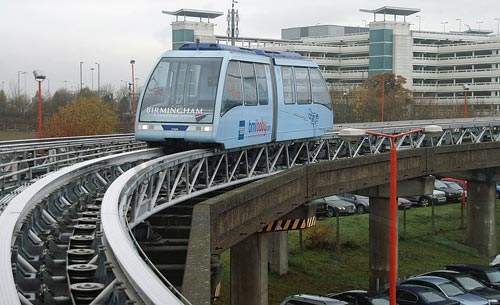 Birmingham's air-rail link carries passengers between the airport, the railway station and NEC. 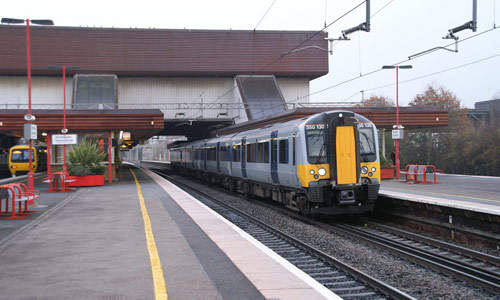 BIA is unusual in the UK, having a mainline railway station, which also serves the nearby National Exhibition Centre. 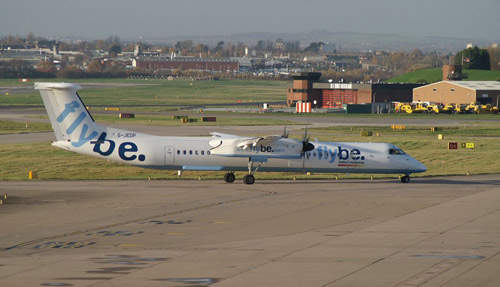 Low-cost operator flybe has a strong presence at BIA.

Nevertheless, as Birmingham is as a city of international standing and a focal point of the West Midlands conurbation with a population of 2.5 million, Birmingham International (BIA) is an important part of the UK aviation industry.

Located eight miles (13km) east of Birmingham city centre in the borough of Solihull, BIA originated in the late 1930s as a municipal airport near the A45 Coventry Road at Elmdon. Requisitioned for military use in the Second World War, by the return to civil use in 1946, there were two hard runways. It was not until 1960 that civic authorities regained control.

Following many changes, by September 2007 ownership of Birmingham International Airport was in the hands of the seven West Midlands council authorities, Airport Group Investments and the Employee Share Trust.

BIA has a rare characteristic for a major UK airport (shared with London Gatwick), namely being sited on a mainline railway, as opposed to a spur like Heathrow and Manchester.

Opened in 1975, Birmingham International station is a principal stop for London-West Midlands and cross-country expresses, as well as having local services. It is located between the airport and the NEC, one of the UK’s largest exhibition and entertainment venues.

With a magnetic levitation system discarded in 1995, since 2003 the elevated 585m air-rail link connects the station with terminal one in 90 seconds at two-minute intervals. BIA is also close to M42 and M6 motorway junctions.

“BIA has a high proportion of business passengers and a strong presence of regional jets.”

During the September 2009-2010 period, 95% of the aircraft landing at the airport used the Continuous Descent Approach (CDA). The benefits of using the CDA include reduction in carbon emissions and noise levels and lesser fuel consumption.

In August 2011, a £9.8m Travelodge hotel opened at the airport. The hotel offers 200 luxury rooms for travellers passing through the airport.

Opened in 1984 and 1991, the two linked terminals north of the runway wholly replaced the original passenger facilities on the south side. A £13m redevelopment programme began in January 2010. As a part of the programme, the two terminals of the airport were combined in February 2011. The new terminal was opened in May 2011.

BIA has a high number of parking spaces within the airport and an on-site hotel. To concentrate operations on the main runway, the 06/24 (1,315m) cross runway dating from 1939 was closed at the end of 2007.

In March 2010, four existing control rooms at the terminal were converted into one facility at the cost of £1.5m. This was done with the aim of making the airport operations more efficient.

A £1.3m Emirates lounge and tourist information centre was opened in 2010. The lounge is only for Emirates’ premium passengers. In April 2011, the airport introduced a hologram called Lucy who acts as a virtual assistant. Lucy, built by Tensator, provides passengers with information on security concerns such as carrying liquids in hand baggage.

No.1 Traveller will open a new lounge at the terminal in October 2012. The lounge will provide a range for services for all departing passengers.

In February 2012, the roof of the terminal was installed with 200 solar panels which will produce 40,000 kWh a year. The panels will reduce carbon dioxide emissions by 22t annually.

The dominant market category (2007) was low-cost at 36%, with a strong presence of Flybe and BMI Baby, easyjet starting their first BIA service in 2007 and Ryanair expanding in 2008 after a previous reduction of services.

As befits the region’s commercial nature and growing reputation in the conference market, BIA has a high proportion of business passengers and a strong presence of regional jets to Western European destinations, these falling in the scheduled short-haul category at 28%. Long-haul destinations (8%) include North America and also reflect the area’s strong links with the Indian sub-continent. There are several operators in the charter market (28%) to many destinations.

At one time having a significant presence with regional operations, latterly BA Connect, British Airways has withdrawn from BIA. In spite of this and the collapse of locally based carrier Duo in 2004, the airport has sustained a diverse range of operations and has around 160 departures daily.

In 2007 BIA won the Airports Council International award as the best airport in Europe in the five to ten million passenger category, with its work in respect of the community and environment identified as particular strengths. In respect of the latest expansion plans, BIA has staged a series of community information and consultation events.

For a brief period from 2002, a Government proposal for a new two-to-three runway airport between Rugby and Coventry threatened both Birmingham and Coventry airports (the latter emerging as a low-cost hub with Thomsonfly). However, restoring confidence for expansion at Birmingham, this prospect soon receded and Coventry, just 16 miles from BIA, was to have their expansion plan rejected in 2007.

“Birmingham International has a rare characteristic for a major UK airport, namely being sited on a mainline railway.”

BIA’s 2005 draft master plan response to the government white paper ‘The Future of Air Transport’ had a second runway and third terminal central to major expansion. By September 2007 this had been scaled back to a lengthening of 15/33 to 3,004m.

The airport is currently undergoing a £100m redevelopment, which includes extension of the runway, realignment of the A45 Coventry road, construction of a new air traffic control tower, new international pier and taxiway, and other related works.

Construction of the new £10m air traffic control tower commenced in May 2011. The 37.125m high tower is scheduled to commence operations by 2013.

In March 2012, VolkerFitzpatrick and Colas joint venture was awarded the contract for the runway extension and realignment of the A45 Coventry road. The £32m A45 realignment project is planned to be completed by summer 2013. The £33m runway extension project is expected to commence in June 2013. It will extend the runway by 405m and is scheduled for completion by spring 2014.

In the longer term, a third terminal is expected to be served by extra air-rail link tracks directly from the railway station.