Expand
The expanded Bamako-Senou International Airport is expected to handle up to 900,000 passengers a year by 2015. Image courtesy of PetterLundkvist.
The airport has a Business lounge connected to the duty-free area. Image courtesy of PetterLundkvist.
A C-17 Globemaster III at Bamako-Senou International Airport. The runway at the airport has been recently expanded to accommodate large aircraft such as Boeing 747. 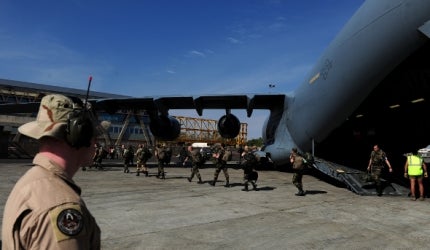 Bamako-Senou international airport is the biggest airport in Mali. It is located 13km south of Bamako, the capital city. The airport was opened in 1974 and is operated by Aéroports du Mali (ADM).

The airport expansion and modernisation programme was initiated with $181m funding provided by Millennium Challenge Corporation (MCC), a US government foreign aid agency.

The construction contract for the runway expansion was awarded to a joint venture consisting of Sogea-Satom (VINCI Construction) and Razel. The project was financed by MCC.

The airport has a single passenger terminal, which is used for both international and domestic flights. The terminal is divided into two separate sections for arrivals and departures.

The airport also has one cargo terminal.

Sinohydro awarded ALSTEF a contract in August 2011 for the design, supply and installation of the baggage handling system at the new terminal of the airport. The scope of the contract included supplying all baggage conveying equipment, baggage screening systems at departures, and three new arrivals carousels. It also included the supply of 16 check-in desks for standard baggage, EDS machines, metal detection frames and other baggage security equipment.

ALSTEF was awarded a contract to renovate the baggage handling system at the airport’s existing terminal during 2009-2010.

"Public bus transport is available to and from the airport and city centre."

The fixed-base operators (FBO) at the airport include United Aviation Services, West Africa Tours, Hadid International Services and Jetex Aero. The airport has a cargo storage capacity of 4.58 million tons.

Car rental offices belonging to Hertz and Locatour are located near the terminal. Taxis are located in front of the airport terminal.