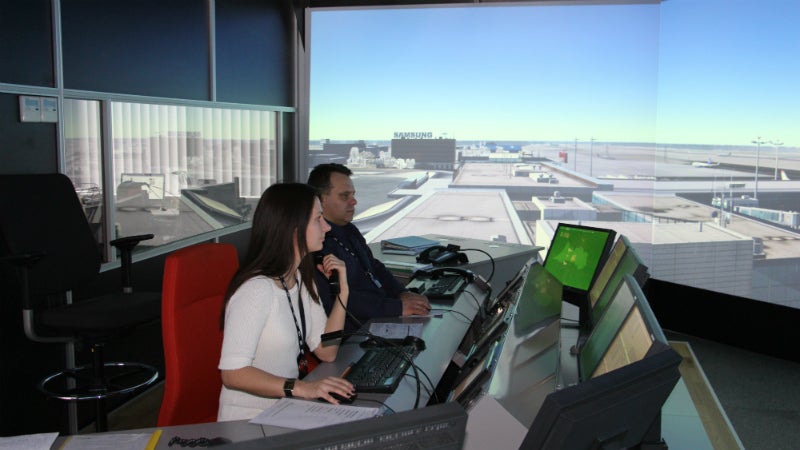 Si ATM provides products and services for air traffic management. It has 30 years of experience of installing operational systems and simulators to air navigation service providers, training institutes and other aviation organisations throughout the world.

Si ATM is known for its high-quality / low risk integration of ATM systems. Flexibility and low-cost maintenance solutions distinguish the company in the competitive market of air traffic management.

Si ATMSys is an advanced ATM system that supports air traffic control operations for en-route (ACC), approach (APP) and tower (TWR) control. Since 1999 Si ATMSys has been upgraded with functionality in conformity with the European Convergence Implementation Plan (ECIP).

Si ATMSys has been designed for and proven to be flexible and configurable for most sizes of ATC system. It processes various radar data with true multi-tracking, handles wide-area multi-lateration and ADS data for fusion with radar data.

Si ATCSim is an air traffic control simulator that provides an operational segment on various functional levels, including:

The simulator segment drives the exercise, generating input to the operational segment and acting as surrounding systems for the output. The main interface provides surveillance data in various forms, flight plan data in ICAO FPL or ADEXP format, meteorological systems such as ATIS, coordination with adjacent FIRs, controller/pilot communication by voice or CPDLC.

TSim is a three-dimensional (3D) tower simulator that provides an integrated and realistic training environment for aerodrome and approach controllers.

The simulator element generates movements based on realistic manoeuvring characteristics for each aircraft type and vehicle. It handles a full set of navigational commands to support movement and route handling on the ground and in the air. The visualisation element creates the ‘out-of-the-window’ view for the aerodrome controller based on the data provided from the simulator element.

The operational elements provide training for airports with a variety of functional capabilities, including:

The simulator is equipped with integrated voice communication facilities that automatically adapt to the exercises being run. Each trainee and pseudo-pilot has access to radio frequencies and direct lines within the exercise.

The main tasks of Si FDPS are flight plan data management and air traffic control. The Si FDPS system provides data to the flight data assistants, who collect, maintain and distribute correct flight plan data based upon RPLs, information from the AFTN, OLDI and other sources. ATC controllers receive correct flight plan information and have the ability to update it, with correct times, route, level and other data, during the progress of flights through the airspace.

Si SDPS is a standalone surveillance data processing system. It is highly adaptable and can be integrated into most ATM environments. The Si SDPS supports air traffic control operations for en-route, approach and tower control.

Si AMAN is an integrated component of the Si ATMSys product, but can also be used as a standalone arrival management system that can be integrated into other systems. Si AMAN is an automated application that supports the preparation of an efficient arrival sequence by en-route and approach air traffic controllers.

CSim is a radar and tower simulator designed to offer integrated and realistic training for en-route, approach and tower controllers.

Si ATM has announced it will participate in the World ATM Congress 2020.

CSim is a radar and tower simulator designed to offer integrated and realistic training for en-route, approach and tower controllers.

Wuhan Tianhe International Airport was opened in April 1995. The airport, which is situated 26km north of Wuhan City, serves the Hubei Province and has the distinction of being the busiest airport in central China.

Riga International Airport, the biggest and busiest international airport in the Baltic region of Northern Europe, is located 10km west of Riga, the capital city of Latvia.

Belgrade Nikola Tesla International Airport is the second busiest airport in Europe. Located 12km away from Belgrade city in the Surčin Municipality, Serbia, the airport opened in 1962.

Zagreb Airport, which is situated in the suburb of Pleso in Croatia, is the country's main international airport and als

The construction of Hong Kong International Airport at Chek Lap Kok was one of the biggest operations in the industry.

Si ATM has announced it will participate in the World ATM Congress 2020.

Si ATM has announced it will be exhibiting at World ATM Congress 2019.

Si ATM was awarded a new multiple year contract with Latvian ANSP Latvijas Gaisa Satiksme for the extension of its ATRACC system with new operational functionality in order to comply with the SESAR programme.

The ATM Radar Emergency System, ARES, supplied and installed by Si ATM, has been in operational use by Croatia Control since February 2014. Si ATM and Croatia Control Ltd signed a contract in October 2012 for the Supply and Installation of ARES.

The air traffic management (ATM) radar emergency system, ARES, supplied and installed by Si ATM is since in operational use by Croatia Control. On 24 October 2014 Si ATM finalised the second phase, completing the delivery to Croatia Control.

Contract Signed Between Si ATM and LGS for CPDLC, DMAN

Si ATM was awarded a new multiple year contract with Latvian ANSP, Latvijas Gaisa Satiksme, for the extension of its ATRACC system with new operational functionality in order to comply with the SESAR programme.

ARES in Operational Use by Croatia Control

The ATM Radar Emergency System, ARES, supplied and installed by Si ATM, is since February 2014 in operational use by Croatia Control. Si ATM and Croatia Control signed a contract in October 2012 for the Supply and Installation of ARES.

Si ATM has successfully delivered the Hong Kong Ultimate Fallback System, as part of a contract for the new Hong Kong ATM system.

The Site Acceptance Test (SAT) for the new Moldavian ATM system (called MAATS) was successfully finished on 22 May 2013 and became operational on 4 June 2013.

Si ATM has delivered its Arrival Manager, product name Si AMAN, to Latvian Air Navigation Service Provider LGS (SAT) in May 2013 in Riga. LGS becomes the first ANSP to validate and use the AMAN, and ordered unique functions to make sequencing for controllers an easier and more efficient task.

Si ATM and Croatia Control Ltd. has in October 2012 signed a contract for the Supply and Installation of ATM Radar Emergency System (ARES).

Si ATM received the purchase order from Raytheon Incorporation, Boston, USA, on 02 May 2011. Raytheon was already awarded a contract with the Hong Kong Civil Aviation Department (CAD) for the installation of a new Air Traffic Control system for the Hong Kong airspace in March 2011.

Si ATM has successfully delivered an advanced ATC simulator to the Wuhan Digital Engineering Institute. The purpose with the simulator is to demonstrate, evaluate and train on modern cutting edge ATC tools.

Come and visit Si ATM at ATC Global in Amsterdam on 6-8 March.