Moderniek has been providing high-performing baggage handling and unit load device (ULD) handling equipment to the airport industry since 1995.

To make ULD unloading more efficient and improve working conditions, Moderniek has designed, manufactured and supplied a new system called MUM (mechanical unloading module). This field-proven system has unloaded more than 50,000 ULDs without any physical effort since it was put into operation in 2010.

The MUM system consists of a ULD unloading device, as well as baggage handling devices to separate and orientate suitcases. To reduce internal movements and space, Moderniek supplies an automatic transporting and buffering system for baggage containers.

The concept of ULD unloading is simple. A full ULD is used with an unloading device known as the Bagtipper, which tilts the ULD approximately 45° and lifts it gradually. Suitcases steadily slide off the ULD and drop on to independently driven conveyor belts running adjacent, where an initial separation is made according to a proven algorithm.

Additional tools are also available for unloading. Suitcases can be released by shaking the ULD or by being flipped out with a rotatable drum positioned at the front of the ULD opening. ULDs, such as AKE and AKH, can be unloaded with push-button controls, while baggage containers without inside and front barriers can be unloaded automatically. The capacity for this device is around 1,200 suitcases every hour.

After baggage unloading, suitcases need to be orientated so that they are short-side leading and positioned in the middle of the conveyor belt. To align baggage, Moderniek supplies a compact device called the Bagliner.

Using information on the position, dimension and orientation of a suitcase, the Bagliner moves two rotatable wheels diagonally across the conveyor belt, the distance and speed of which are variable. Long-side leading suitcases rotate towards the short-side leading direction.

To reduce baggage handling system errors, a suitcase needs to be positioned with its wheels facing up. To rotate baggage this way, Moderniek offers the Upwheeler. Using information on a suitcase’s positioning, the Upwheeler can turn luggage 180°.

ALT is equipped with unique friction roller conveyors, which offer advantages in terms of safety, reliability and robustness. Baggage containers are transported automatically to their destination, while they can also be displaced manually in case of emergency.

To facilitate automatic baggage container transport, it is necessary to transfer containers from dollies to transport systems and vice versa. Moderniek supplies adjustable conveyors for transporting ULDs from rotary deck dollies. When a dolly stops, it will adjust automatically in height and position to assist the manual ULD transfer.

To transfer a ULD from a side-loading dolly, the adjustable conveyor will also alter its height and side position, while the dolly will automatically unlock. No manual intervention is required for the container and dolly, which makes transferring easy. 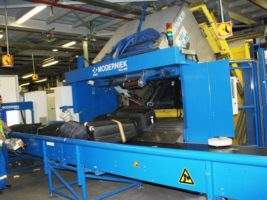 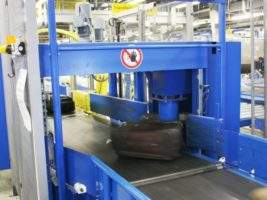 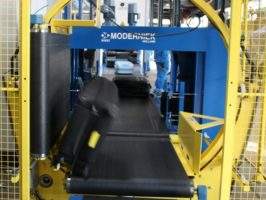 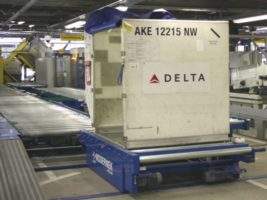 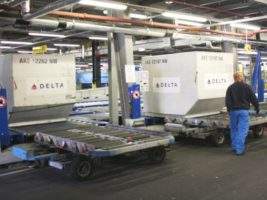