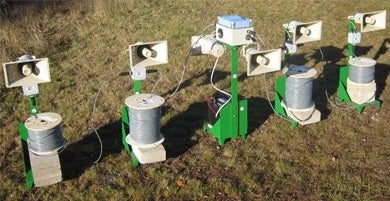 Phoenix Agritech assesses airports to discover local bird species in the area, and creates an evolving programme of sounds to reduce habituation. Each site-specific wailer system is pre-programmed to act as a deterrent for indigenous species.

The wailer emits up to 25 electronic sounds at volumes up to 124dB, which can be included in the programme, if necessary.

Phoenix Agritech develops electronic bird deterrent systems for airport runways.
The systems use natural predator calls and alarm sounds to move birds away from runways and helipads.
The Phoenix Airport Wailer Mk IV emits 25 electronic sounds at volumes up to 124dB.
Phoenix Agritech creates an evolving programme of sounds based on bird species at specific airports.
The cost-effective, easy-to-install Phoenix Airport Wailer Mk IV does not use chemicals, propane, explosives or guns.
Trials in India have shown the wailer system has a success rate of up to 97%.
Phoenix Agritech has distributed its bird deterrent systems at major airports worldwide.

The Mk IV system carries the randomised programme on a system-specific micro SD card, which can be modified from Phoenix Agritech’s head office, by email.

The Phoenix Airport Wailer Mk IV also deters birds gradually rather than startling and driving them off, only to have them return later, effectively creating a bird-free zone.

Easy and quick to install, the Phoenix Airport Wailer Mk IV does not use chemicals, propane, explosives or guns. It is also cost-effective and can be operated 24 hours a day automatically.

Scientific trials at Indian airports have shown that the system has a success rate of up to 97%, making it a key application for bird deterrent and wildlife management programmes.

Phoenix Agritech has deployed its bird deterrent systems at major airports worldwide, including Bulgaria, Canada, the US, Asia, the Middle East, Africa and the Carribean.