Clear Flight Solutions (CFS) develops flapping wing robotic birds-of-prey for bird control purposes on and around airports, and everywhere else where birds cause problems. 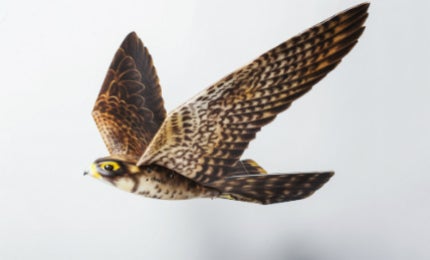 Clear Flight Solutions (CFS) develops flapping wing robotic birds-of-prey for avian pest control purposes on and around airports, and everywhere else where they cause problems.

The CFS Robird is the only bird control solution whereby pests can be chased away without habituation in the direction of choice. With this unique and proven system, pressure can be reduced by up to 95%.

Practically all bird control methods are scaring techniques geared towards a short impulse, such as loud sounds, flash-bangs, or lasers. Birds’ reactions to these systems is to fly up and scatter, and as soon as the impulse is gone they return to the area.

Birds are quick learners, so after a short while they will start to ignore these impulses as they understand that they are not life-threatening. In contrast, they have learned that birds-of-prey are a real danger, even when one has never been seen before, and their instinct is to leave the area immediately.

Falconers are used sparingly at airports, they can easily cause a strike.

The reaction of pest birds to predators is to fly up in groups and flock together for safety. CFS uses this response to fly the Robirds around the flock and direct it in the direction of choice, out of harm’s way.

After a short while they will start to avoid the area as they know that a predator is nearby. CFS’s flapping wing technology is essential, as pest birds only respond in the above way to hunting, and not gliding birds of prey

Before CFS started to operate at airports, the system was fully tested at less sensitive areas, such as waste management sites, industrial areas, and in agriculture.

The results were monitored by independent third parties. CFS reached results of up to 95% reduction of bird pressure, with a lasting effect as birds recognised the area as a hunting ground for predators.

Coupled with the ongoing development of the Robirds, several large airports believe that the system is ready for safe use at airports, with good results.

CFS works with professional, well-trained pilots, accordant to the most stringent flight protocols in aviation.

As the Netherlands is the only country in the world where all remotely piloted aircraft systems (RPAS) need to be certified, even in the lowest weight category, all the operational CFS Robirds are fully registered aircraft.

The CFS Robirds share airspace with manned aviation, so Clear Flight Solutions has built in as many safety features as possible to guarantee that the Robirds can be operated near active runways without danger.

Robirds are equipped with autopilot, fly-by-wire and geo-fencing, a system that creates a bubble of airspace the Robird cannot get out of. Using these methods it is near impossible for the units to get near other aircraft.

Clear Flight Solutions is developing a system whereby the Robirds will work in conjunction with an avian radar system. Different Robirds will be positioned on the perimeter of the airfield, and can be launched automatically.

The radar will guide the unmanned aircraft system (UAS) to the approaching pest birds, where the Robird, fitted with sensors, will chase them away from the active runways. The UAS will then return to a docking station to be recharged for the next flight.

Clear Flight Solutions is a start-up company from the University of Twente.

To ensure the effectiveness of the system as a means of bird control, CFS also works very closely together with a number of biologists, ornithologists and falconers. The CFS team consists of a variety of different experts from both the technical and aviation sectors.

CFS is inviting more airports, mainly in Europe, to start up new projects to hone its expertise, and help airports make manned aviation even safer.