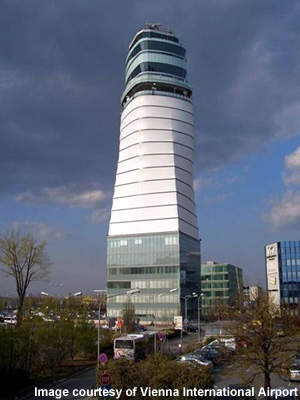 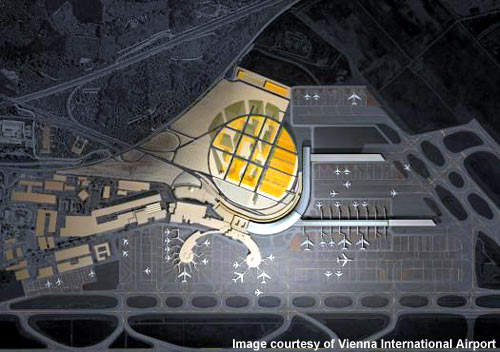 A plan view of Skylink at Vienna International Airport. 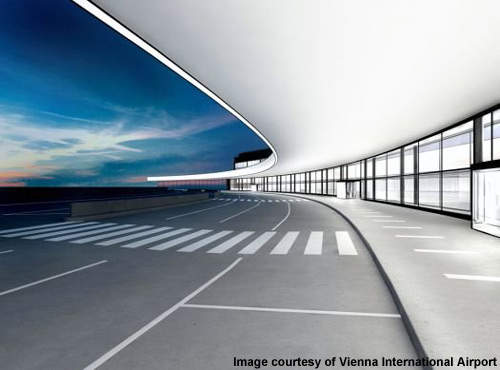 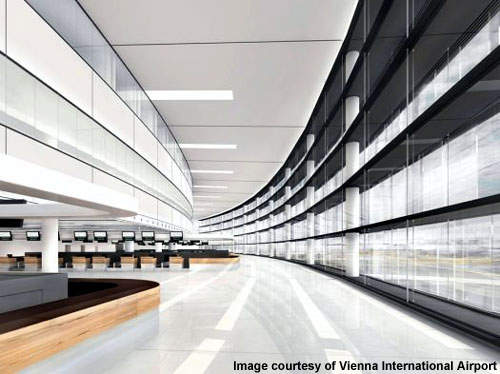 The Skylink construction site in 2006. 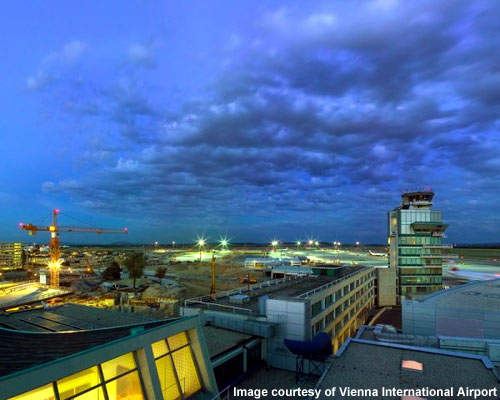 Construction has continued while the airport is still in operation. 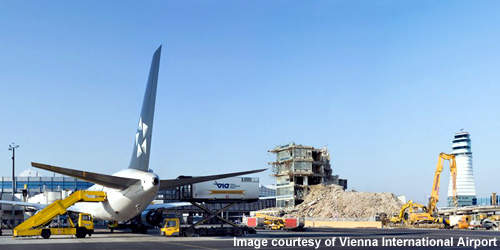 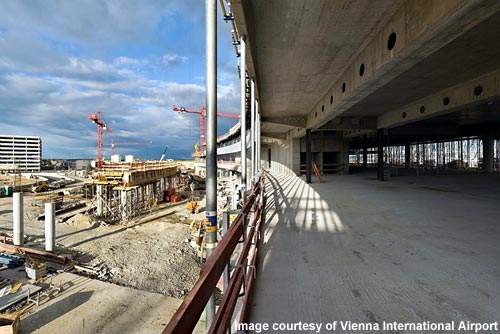 Skylink will have a distinctive curved shape.

Vienna International Airport is the biggest and busiest airport in Austria. The airport, first built in 1938 as a military installation, is actually situated around 18km from the City of Vienna near the town of Schwechat and the airport is sometimes called Schwechat Airport.

The project is aiming to increase the available terminal space and to bring the airport into a more efficient configuration to handle larger aircraft and to comply with international regulations about the separation of Schengen and non-Schengen operations at the airport.

The major aim of the plan is to expand the airport and to allow it to operate more efficiently. The 2015 master plan is being undertaken in three phases. Projects include:

In November 2000 the architects Itten-Brechbühl / Baumschlager-Eberle undertook the first (preliminary) phase of planning, which led to the submission of the plans to the authorities.

“The major aim of the plan is to expand Vienna International Airport and to allow it to operate more efficiently.”

Approval for the construction of Skylink was granted in November 2003. Following the successful planning application a new architect, the P.ARC-Moser-Neumann consortium, was awarded the contract for the further planning of the project.

Skylink is a terminal expansion project that will join on to the existing terminal two. The new 150,000ft² structure will curve off in a distinctive sickle-shape towards the north-east.

The newly constructed 51-gate south pier will now provide a total of 17 additional aircraft docking positions (can be widebodied jets). A subsequent phase of construction will see the construction of an additional North Pier. The development will also include the ‘north-east apron extension’ between and to the north of the two fingers of the pier and will involve construction over a railway line.

The Skylink extension will help to promote an under-one-roof concept (airport city) for the airport integrating the existing terminal buildings with the new pier and also giving covered access to the multi-storey car parks and railway stations.

The 730m curved terminal building has been designed with glass façades on its north and south aspects, which will give an important visual connection for passengers between the landside and airside of the airport.

“Skylink is a terminal expansion project that will join on to the existing terminal two.”

The extensive use of glass in the building allows excellent views from all areas of the airport of the surrounding countryside which is aesthetically pleasing and also functional, allowing passengers to see exactly where they need to be as soon as they have cleared check-in and security.

The Skylink extension will also add significantly to the airport’s check-in facilities, retail areas, food and beverage offerings and lounges.

The €60m ($71.9m) contract for the Skylink expansion was awarded to Hochtief Construction AG in October 2005. The contract includes construction of Skylink and partial fitting out.

The contract has also included Hochtief’s Austrian subsidiary Dipl. Ing. Hugo Durst GmbH. Another Hochtief subsidiary, Streif Baulogistik GmbH, has also won a €1.9m contract for the construction and operation of a 500-unit container village at the airport.