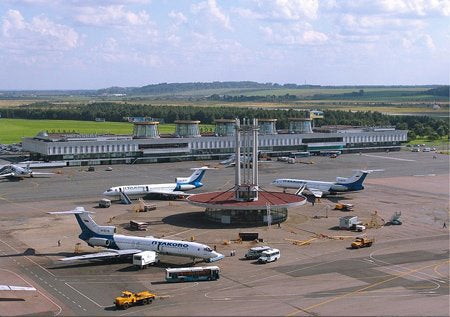 The airport was renamed Pulkovo Airport in April 1973, and a new terminal was opened allowing a 40% increase in airport traffic up to the 1990s. Pulkovo is the fourth busiest airport in Russia after Domodedovo, Sheremetyevo and Vnukovo.

By 2010 the airport handled seven million passengers, and by 2015 passenger numbers are expected to have exceeded ten million and 17 million by 2015.

"By 2010 the airport handled seven million passengers, and by 2015 passenger numbers are expected to have exceeded ten million."

The airport has now been taken over by a private consortium that consists of Fraport AG and its partners in the Northern Capital Gateway consortium.

The consortium acquired the airport with the rights to operate, develop and modernise it. The concession period is 30 years. In 2007, a modernisation and development project was approved and will be executed in two phases.

Ramboll was appointed as the lead design consultant for the airport redevelopment. Ramboll provided civil, geotechnical and structural engineering services as well as acoustics and building services.

The first phase involving construction of a new passenger terminal, apron area expansion and other airport infrastructure improvements began in November 2010. Operational readiness and airport transfer testing began in September 2013 and the new main terminal building will be opened in December 2013.

Phase II will involve reconstruction of the domestic terminal that will be connected to the new international terminal. The group plans to invest €1bn ($1.32bn) on the modernisation, which is scheduled for completion by 2016.

Pulkovo airport has two passenger terminals: Pulkovo-1 for domestic flights and Pulkovo-2 for international flights). It also has one cargo terminal, 47 aircraft stands (this will be increased to 100 by 2025).

Terminal one was built in 1973, whereas terminal two was built in the 1950s and reconstructed in 2003. Both facilities are modern and well equipped, particularly with security equipment, baggage screening machines, Rapiscan and Heimann and security cameras from France and Germany.

The new terminal will be located directly to the north of terminal one and will contain 18 gates. Funding to the tune of €1.2bn will be provided by VTB Bank. The new terminal was designed by Grimshaw Architects.

A major refurbishment of the 10R / 28L runway and adjacent taxiways was carried out in mid-2006 so the airport could receive delegates for the G8 summit (Pulkovo is the home town of Russian President Vladimir Putin).

The 10R / 28L runway is now the only runway in Russia equipped to serve the new Airbus A380. The reconstruction of a second runway was also completed and opened in December 2009.

The runway renovation project, which had to be completed within three months, consisted of slipforming over 53,519m³ of a reinforced concrete runway. Centrodorstroy JSCo, with headquarters in Moscow, Russia, was the contractor in charge of the runway work.

The company used a GOMACO paving train, consisting of a PS-2600 placer / spreader, a four-track GHP-2800 with auto-float, and a T / C-600 texture / cure machine. The refurbished concrete runway is 60m wide and 3.7km long. Its thickness varies between 280mm and 300mm, according to the project’s specifications. Paving passes with the GHP-2800 are 7.5m wide.

Concrete for the project was mixed onsite in two portable batch plants. Twelve dump trucks with a capacity to carry between 8m³ and 12m³ of concrete hauled it from the batch plants to the PS-2600 placer / spreader. Paving production averaged 1m a minute, with their highest daily production reaching 1,200m³.

For Pulkovo-1, the first stage of the 2003 phase I refurbishment was the reconstruction of the ramp, including all the engineering communications. April 2000 saw the official opening of the international sector at Pulkovo-1, enabling the terminal to handle flights from abroad.

The terminal consists of four levels designed to separate passenger flows. The first level, handling arrivals and luggage, is divided into two sections: one for international, the other for domestic flights.

The second level also has separate sections for domestic and international flights. This is where all passengers and their luggage undergo preflight checks and outbound passengers are registered. Passport control and customs clearance are also administered on the second level, along with ticket sales and luggage packing.

There are Lenrianta duty free shops on the second level, as well as a pharmacy, café, post office, currency exchange office, book shops and newsstands, all located in the shopping area. A new café opened on the second level in 2006, occupying part of the waiting room, offering a panoramic view of the airfield.

Other projects in 2006 included interior redesign at Moskva and Ladoga bars, an additional waiting room with 72 seats furnished and opened, and some passenger elevators being replaced with new bigger and better ones.

The third and fourth levels house recreation areas for travellers, a VIP lounge, a mother and child room, some bars (including an Irish bar called ‘One for the Road’), a restaurant, a hair salon, payphones, and Russian and CIS airline offices. There are also many wireless internet hot spots at the terminal, which is also equipped with modern computer facilities.

Pulkovo-2 handles the majority of long-haul international flights in Russia. The terminal was refurbished in the early 1990s when the arrivals and departures areas were enlarged and connected by a spacious gallery, with comfortable seats for relaxation, television and a bar for passengers.

The terminal is equipped with three aerobridges made by Jet Way Systems, providing the opportunity to pass directly from the comfort of the gallery to the cabin of the aircraft.

The use of automatic check-in procedures for passengers and luggage and the SDCS loading system also assist in improving the standard of service.

Pulkovo-2 has a VIP lounge and two executive lounges offering phone and fax services, newspapers and magazines in both Russian and foreign languages, a wide range of alcoholic and soft beverages and snacks. The executive lounges serve business travellers including holders of PriorityPass, Citi Gold and Diners Club International cards.

Wireless internet hot spots were set up at Pulkovo-2 in 2005. The front of Pulkovo-2 has parking for 350 cars. There is also a free parking facility for 136 cars nearby.

Sheremetyevo International Airport is based about 29km north of Moscow, Russia, and is about to embark on a hugely ambitious upgrade programme.

Domodedovo International Airport (DME) is managed and operated by the EAST LINE Group.