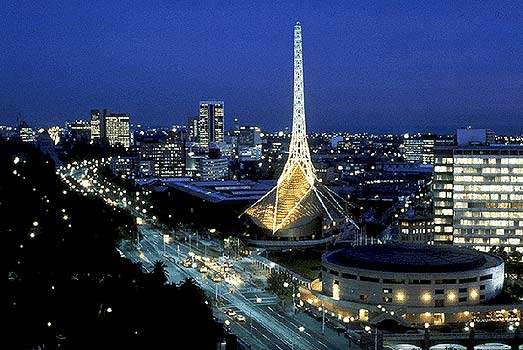 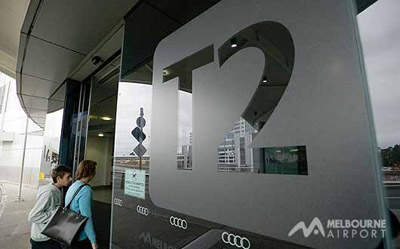 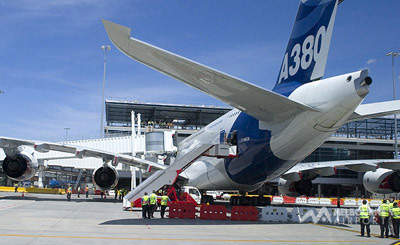 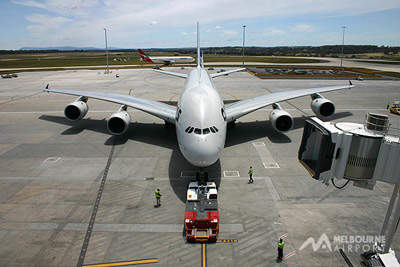 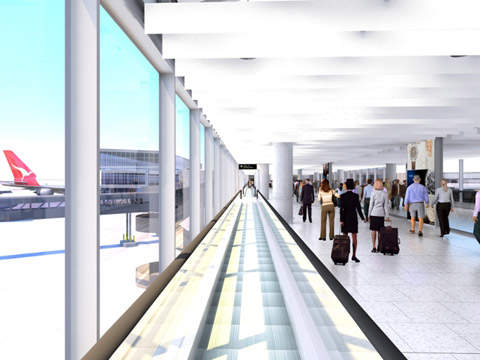 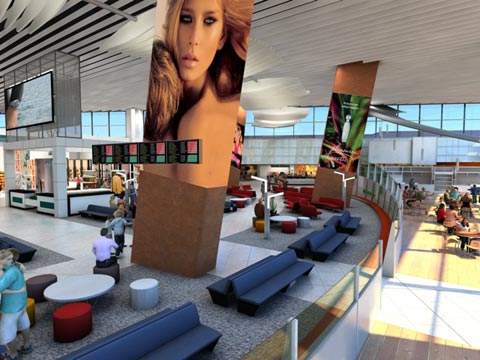 The A380 being towed into position on a stand with one of the new aerobridges evident. 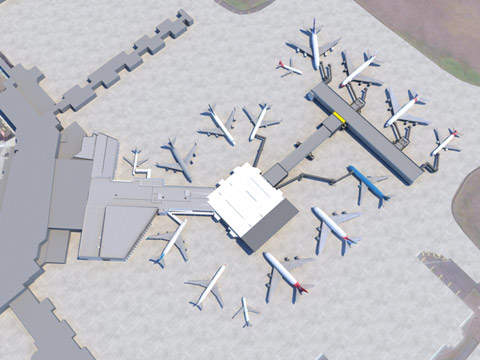 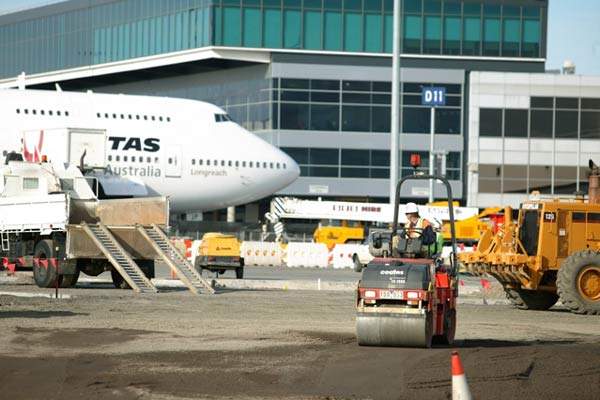 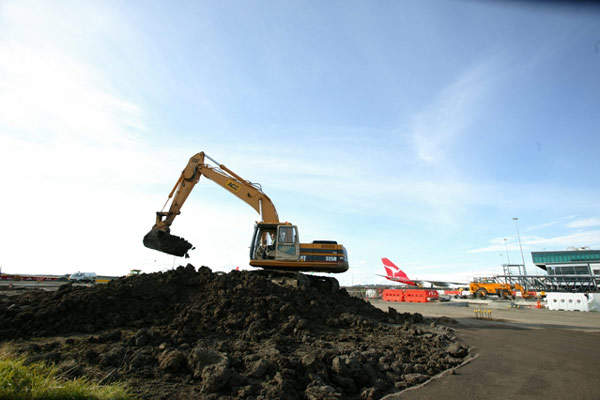 The arrangement of gates and aerobridges around T2. 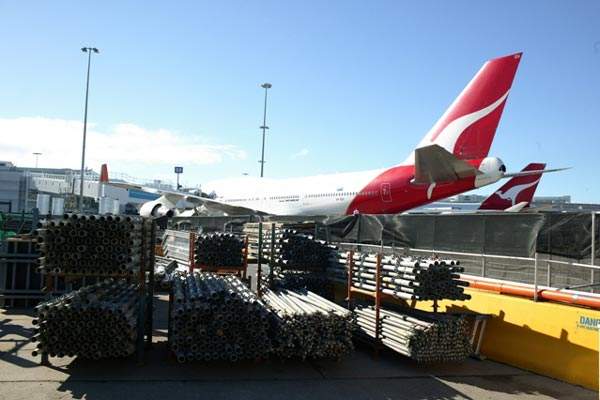 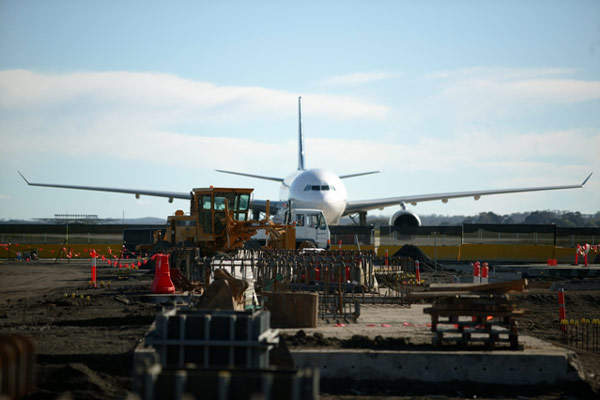 Melbourne Airport is located to the north of the city, next to the suburb of Tullamarine, Victoria. The airport was originally built to replace the outdated Essendon Airport, which did not have facilities to handle Boeing 747 and McDonnell Douglas DC-10.

The airport first opened in 1970 and has four terminals. The international terminal (T2) has 14 gates. The domestic terminals – T1, used exclusively by Qantas and the associated Jetstar carrier, and the multi-user T3 used by Virgin Blue and Regional Express – have a total of 46 gates.

In October 2007 T4 an additional domestic terminal (which was originally occupied by Virgin Blue and more recently as offices for the airport operations team) was relaunched after a $5m refit for the budget carrier (refit started in June 2007) Tiger Airways, that expects to handle two million passengers a year. Tiger Airways is a low-cost Asia-Pacific carrier that has launched inexpensive domestic fares from Melbourne across Australia.

“Melbourne Airport is located to the north of the city, next to the suburb of Tullamarine, Victoria.”

Tiger Airways, which operates from three gates and five aircraft parking positions, conducted its first flight from the terminal on 23 November 2007.

Melbourne Airport was leased to the Australia Pacific Airports Corporation in 1997 for 50 years. Significant refurbishment of the rather dated terminals has been undertaken since privatisation and the airport now boasts a wide array of shops and food outlets.

Melbourne Airport has two intersecting runways. The north / south runway (16/34) is 3,657m long, and the east / west (9/27) is 2,286m long. The most recent updating projects have been undertaken to prepare the airport for the late 2006 arrival of the double-deck Airbus A380, which has been ordered by Qantas, Singapore Airlines, Emirates and Malaysia Airlines.

Improvements have included construction of aerobridges with the ability to board both decks simultaneously to reduce turnaround times and widening of the north / south runway by 15m. The improvement project for Melbourne was estimated to require an investment of $220m.

The improvements had two aims – to upgrade facilities for the 2006 Commonwealth games and also to prepare for the accommodation of the A380 superjumbo.

A number of improvements had to be made to the airport facilities in time for the A380’s world tour visit in November 2005. A new 0.6ha northern parking stand-off area was constructed to accommodate two A380s or 747s. The project, requiring the laying of over 100 aircraft-grade concrete pavings, started in September 2004 and was completed by April 2005. The new hard stand has a dual purpose in that it can also be used as a maintenance area.

Other apron areas being used for parking the ‘heavier’ A380 required the replacement of 30,000m² of aircraft-strength concrete pavement. Pavement-widening work on the north / south runway (to accommodate the A380) was started in April 2005 and was completed by June 2005 (contract awarded to the John Holland Group).

The work required the increasing of the width by 15m (7.5m each side) and also the upgrading of runway lighting and other airfield services. The runway-widening project required the excavation of 81,000t of earth, 40,000m² of new pavement, 500 new runway lights, 150km of new lighting cable, 7km of new drainage and 65,000m² of pavement widening.

One of the major requirements for the arrival of the first A380 at Melbourne Airport was the installation of a working dual aerobridge. These structures (two of which are being constructed initially) can allow both levels of the A380 to disembark at once.

The aerobridges are flexible and can also service two smaller aircraft simultaneously. One of the arms can be raised by up to 8.5m to affix to an upper deck. But the arms also have an operational radius of 40m for the servicing of smaller aircraft and so offer an new versatility for passenger disembarkation.

Melbourne has the distinction of being one of the only airports in the world, and certainly Australia, that can fully accommodate the A380.

Improvements for the 2006 Commonwealth Games

The improvements included a $3m project to construct a second entry road to the airport from the Tullamarine Freeway. The contract was awarded to P&D Mitchell Contract Grading. The project was undertaken to reduce congestion on the existing entrance road. The project began in June 2005 and was completed by November 2005.

“Melbourne has the distinction of being one of the only airports in the world that can accommodate the A380.”

The main terminal (T2) was expanded by over 5,000m² by extending the existing building 20m (total building expansion 20m×80m over two levels) to the north through the old gates D9 and D11 (contract awarded to LU Simon Builders and included the construction of the two new dual aerobridges). This more than doubled space for passengers. The passenger seating capacity has also been increased by 165% with 400 new seats.

The terminal improvements required 4,400t of concrete and also the installation of 600 new light fittings, 1,225m² of glass installed and 3,386m² of new carpet. The work was completed by the end of February 2006 in time and within budget for the Commonwealth Games.

The domestic express terminal T4 (2,500m², single-storey with 800m² of gate lounge) opened in December 2000 (construction began May 2000 and was completed by September 2000) and was the original home of Virgin Blue, which previously operated from the international terminal. The project required an investment of $9m.

Prior to this project there was no existing terminal space available at Melbourne Airport for new domestic airlines. Both Qantas and Ansett had long-term leases to their terminals as part of a previous federal government’s decision, which gave the carriers the right to control who uses those facilities. This is why a new low-cost terminal was required.

The terminal accommodates 600 passengers an hour and six aircraft simultaneously but could not have aerobridges as there was insufficient space in front of the terminal. The lead contractor for the new domestic terminal was Fletcher Construction.

Two aerobridges for the Ansett terminal were manufactured by Airport Equipment of Lower Hutt, New Zealand. A portion of T4 has been occupied by Tiger Airways since October 2007.

In August 2007 a new expansion project for the international terminal (T2) to add 25,000ft² of floor space was announced. The new expansion required an investment of $330m over a five-year period for a series of integrated projects. In January 2008 ground breaking occurred for the first phase of the expansion. Work on the first phase was completed in 2009 and T2 was officially opened in December 2009. The first phase included new outbound passenger processing zones and a new security and customs area in the departures level.

“A number of improvements had to be made to Melbourne Airport’s facilities in time for the A380’s world tour visit.”

The construction of a new outward passenger security and customs area increased security stations from six to ten and customs desks from 18 to 24 and added 3,000m² of floor space. In November 2008, Smartgate passport control was introduced at Melbourne airport giving certain Australian and New Zealand passengers an option to self-process through passport control.

Another project enhanced the airport’s baggage-handling capability with two A380 baggage carousels for inbound flights. Work on baggage delivery improvements for outward bound flights from 3,000 to 4,500 bags an hour started in 2010 and was completed in 2012.

The terminal was enhanced by a 7,000m² passenger concourse giving five new aircraft parking bays and three new gates with dual-level aerobridges for the A380.

A new retail precinct for T2 (5,000m²) was built between November 2008 and December 2011. This introduced 10m-high glass windows for passengers to observe the airfield and also add around 50% more cafe and lounge space as well as ten new retail outlets.

In March 2008 the airport refinanced $700m of debt for the expansion project. Funds were provided by Commonwealth Bank, ABN AMRO, Deutsche Bank, NAB and NAZ.

The control tower is located about 600m west of runway 16/34. In March 2010 it was decided that a new control tower and technical service centre would be built with an investment of $17m and $21m, respectively.