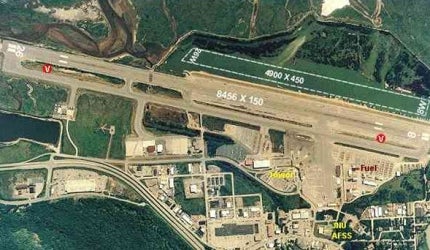 Juneau International is a public airport serving the city of Juneau, the capital city of Alaska, US. It is located at a distance of 11km from the central business district of Juneau. The airport is the only other transport link for the city besides the Alaska Marine Highway.

Juneau International is spread over an area of 653 acres and serves as a regional hub for Alaska Airlines and Bush Carriers. In 2011, the airport was used by 0.3 million passengers and recorded 86,564 aircraft movements.

The passenger terminal at the airport was recently renovated, finishing in May 2011 and taking three years of design and construction at a total cost of $18m.

"Juneau International is spread over an area of 653 acres and serves as a regional hub for Alaska Airlines and Bush Carriers."

The passenger terminal building at Juneau international airport was constructed in 1948 and has undergone multiple renovations since then. It has a built-up area of 80,000ft2 and offers facilities, such as baggage and freezer storage services, food and drink stores, lost and found centre, a smoking zone and internet access areas.

The passenger terminal underwent a massive expansion recently, which was carried out in three phases.

Phase I included the construction of new windows and siding on the south of the terminal, while a new roof was also installed. The second phase featured expansions at the eastern end of the terminal building, as well as interior renovations in the first and second floors of the terminal to serve Alaska Airlines.

The third phase of expansion included the installation of a geothermal station, worth $15,000 and installed in May 2011. It uses 16 miles of underground piping that contains ethanol mixed with water. The difference between temperature of the ground and that of air is used to create heat, which is transferred into the building.

Ted Stevens International Airport (renamed in 2000 in honour of Alaska’s senior US Senator) serves Anchorage in Alaska, the northernmost state in the USA (the airport is situated 12km south of the city). The terminals were over 45 years old and desperately needed upgrading to accommodate the passenger numbers using the airport.

Other new features included in the terminal are a community room, an escalator, touch-screen hotel directory, advertising by means of a plasma screen in the luggage claim, a glass panel that gives a view of Juneau mountain and glacier, as well as a lounge wall with new entrance.

The size of the baggage belt in the terminal was also doubled during the expansion, while the aging advertisement boards throughout the terminal were replaced by backlit poster boards.

A new body scanner was installed at the Transportation Security Administration area in the terminal, in January 2012. The system uses second generation advanced imaging technology (AIT) machines and works on Millimetre Wave technology, which transmits harmless radio waves and sketches the outline of the body.

The airport has a single asphalt runway (8/26), which was upgraded in 2009 with the aim of bringing the runway’s safety standards in line with those prescribed by the US Federal Aviation Administration (FAA).

"New snow removal equipment is planned to be added at the airport for efficient and cost-effective maintenance."

The first phase of the upgrade expanded the runway length by 900ft westwards and 250ft eastwards, at a cost of $42m. It has also added a 75ft safety area to either sides of the runway. The second phase will be executed in two sub phases (2a and 3b) at an estimated cost of $32m.

The FAA will fund 95% of the runway upgrade cost, with the remaining funded by state and local investors.

Renovation of the terminal’s main entry, which started in early 2012, is underway for scheduled completion in 2012. However, the terminal building still needs renovations that are worth $70m.

New snow removal equipment is planned to be added at the airport for efficient and cost-effective maintenance.

04 Jan 2021
Registration is disabled.
We use cookies to ensure that we give you the best experience on our website. If you continue to use this site we will assume that you are happy with it.ContinueLearn more
Recommended article