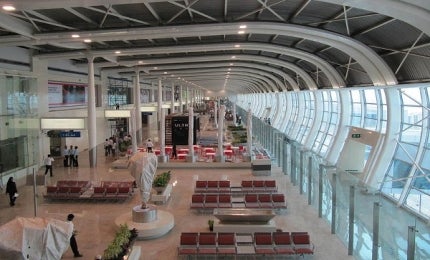 One of the biggest airports in Pakistan, Jinnah International Airport is located 14km east of Karachi city, the capital of Sindh province. The airport has an area of over 1,150ha and was previously known as Quaid-e-Azam International Airport. It was renamed after Muhammad Ali Jinnah, the founder of Pakistan and its first governor general. Pakistan Civil Aviation Authority (CAA) operates the airport.

"The airport was renamed after Muhammad Ali Jinnah, the founder of Pakistan and its first governor general."

Four aircraft crashed at the airport between 1953 and 2010 while taking off, resulting in 34 causalities. In 1986, a Boeing 747-121 aircraft of Pan America World Airways was hijacked by Palestinian gunmen, who killed 20 passengers in the incident.

In June, the airport was attacked by armed terrorists. More than 36 people, including ten terrorists, died in the incident and roughly 18 people were injured.

History of the airport

The architectural planning and design for the terminal was provided by Airconsult, in association with National Engineering Services Pakistan (NESPAK). The general construction contract was awarded to Sogea Construction.

Multan International Airport is located at Multan in Punjab, Pakistan.

The Jinnah International Airport has two 46m-wide runways; 25R/07L and 25L/07R, which are 3,200m and 3,400m long respectively. Both are paved with concrete and comply with instrument landing system (ILS) category 1 standards.

The airport has 12 taxiways, and apron/parking area spread over 266,000m² with 42 parking stands, including 12 with contact gates connecting the parking stands directly to the terminal building. The domestic and International terminals each have six parking stands. The airport also has 30 remote parking bays.

Bus and minibus routes run from the centre of Karachi to the airport. A wide variety of shuttles, private taxis, limousines and car rental facilities are also available at the airport. Car rental company Avis runs has an office at the terminal.