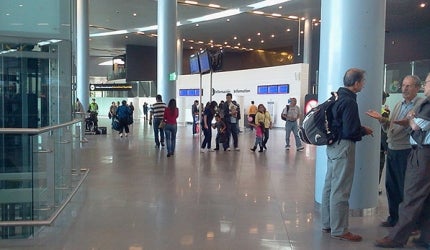 A major renovation project was announced at the airport in 2007, with the main aim to enhance passenger capacity. Several defects in the airport structure were found during the course of renovation, which led to a decision to rebuild the airport altogether and demolish the prevailing structure.

"Construction of a new international terminal was part of the airport rebuilding project."

The new international terminal is part of a bigger plan that aims to minimise congestion at the airport. The total cost of the rebuilding and modernisation plan is estimated to be $564m.

El Dorado Airport commenced operations more than five decades ago, and the premises turned out to be too small for handling the huge increase in passenger traffic.

The new international terminal has a built-up area of 387,500ft2. It has six lanes, which can facilitate movement of around 80,000 vehicles a day.

El Dorado International Airport is one of the top 100 busiest airports in the world. It is located 15km west of the city centre of Bogota in Colombia, South America. It is an important gateway for trade in Latin America. It has a landing field of 1,700 acres, the third largest in the world. It was built in the 1950s.

The terminal has 45 immigration lanes and 64 check-in counters, more than double the old terminal; immigration counters for incoming flights have increased by 56%. The new terminal also has 15 elevators and nine escalators.

The new terminal is designed to allow more ventilation and natural light into the building. It includes a large duty-free shopping area, bars and restaurants.

The integrated system of baggage processing at the new international terminal, which is 225% more efficient than the previous system, is automatic with a capacity to handle around 10,200 bags. Apart from Cancun International Airport, El Dorado is the only Latin American airport to feature an automated baggage system.

The new international terminal at El Dorado airport has 12 security filters, with a 300% increase in efficiency over the preceding security system. The new three-layered security system has been designed to facilitate detection of narcotics, firearms and explosives.

"The total cost of the rebuilding and modernisation plan is estimated to be $564m."

Funding for the international terminal