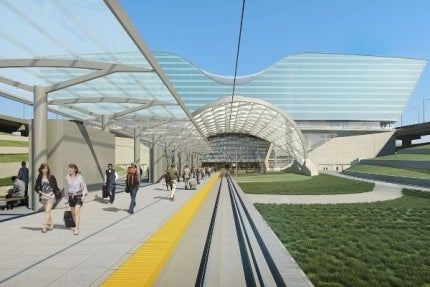 The $544m project includes the construction of a new Westin Hotel and conference centre, a Public Transit Centre (PTC) and a Public Plaza at the terminal. The project was completed in April 2016.

The project created 1,000 jobs, including 700 in construction and design, as well as 200 permanent jobs in the hotel.

DIA is the world’s 19th busiest airport, handling 54 million passengers in 2015. The airport is owned and operated by City & County of Denver Department of Aviation.

History of the South Terminal Redevelopment Program at DIA

The STRP project was first designed by Santiago Calatrava. The original design included the plan to construct a signature bridge over Peña Boulevard for a FasTracks commuter train.

During an inspection in April 2011, the Regional Transportation District (RTD) identified that the construction of an elevated rail line would be cheaper than that of a signature bridge. The estimated cost for the signature bridge was $22m while the rail line was built for approximately $1.4m.

The design concepts for the STRP project were revised accordingly in January 2012. The revised plan included the construction of an elevated rail line over Peña Boulevard and a reduction in the size of the train station and hotel at the terminal, while reducing the project’s original cost from $650m to $544m.

The terminal design is based on LEED (Leadership in Energy and Environmental Design) standards.

The 433,000ft² Westin Hotel has 14 floors and 519 guest rooms. It features a grand lobby, which provides views of the mountains and airport runways. It also features a restaurant, gym, a fitness centre and an indoor pool.

The saddle at the centre of the hotel is designed to maintain sight lines to the terminal’s signature peaked roof.

The conference centre covers an area of 10,000ft² and has 12 meeting rooms. It is used for meetings, banquets, conventions and trade shows. An area of 16,000ft² is covered by three ballrooms.

Denver International Airport in Colorado, US, was completed in 1995. Since its opening, the airport has continued to grow, with a sixth runway brought into service in September 2003. The airport received a FAA Environmental Stewardship Award for 2007.

The PTC features a new RTD FasTracks commuter East Rail Line and station. It also features a centralised pick-up and drop-off facility for all RTD buses. The 22.8 mile-long rail line runs from the airport to the Denver Union Station.

The existing concourse baggage and train systems were also improved as part of the project.

The STRP plan was announced in 2010. The construction of RTD East rail line was started in 2012 and was completed in April 2016.

The redeveloped terminal has a gross area of approximately 730,000ft², excluding the public plaza.

Contractors involved with the South terminal redevelopment at DIA

A joint venture (JV) of Mortenson, Hunt and Saunders (MHS) constructed the Westin Hotel and conference centre, and the PTC. The JV partners are collaborating using a software solution supplied by Textura Corporation.

"The airport is owned and operated by City & County of Denver Department of Aviation."

Kiewit received a $50m contract to provide construction-enabling services for the project. The scope of work includes excavation and utility relocation.