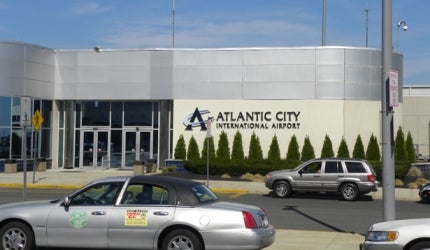 Atlantic City International Airport is located in the north-western part of the central business district in Atlantic City, New Jersey, US. Commercial service at the airport began in 1978 with Allegheny Airlines.

The airport was initially established as a naval air station in 1942. In June 1958, the station was decommissioned and its services transferred to the Airways Modernization Board (AMB). The Federal Aviation Authority (FAA) took over the operations of the AMB that year. Later, the FAA established a research and testing hub, the William J Hughes Technical Center.

Initially, South Jersey Transportation Authority (SJTA) owned the airport on a lease basis from the FAA. SJTA took over the ownership in 2005 and currently operates the airport.

The airport is a base for the Atlantic City Air National Guard and the Coast Guard Air Station Atlantic City. In 2011, the airport handled over one million passengers.

Construction of a trigeneration power plant with an investment of $60m was planned for the airport in 2009. Pepco Energy was awarded the contract to build and operate the eco-friendly plant.

The airport’s expansion began in 2005 as part of a long-term improvement programme, and major works were completed by 2009. The apron and taxiways were increased in size, and the terminal building expanded from 110,000ft2 up to 185,000ft2.

In 2005, extensions of the terminal and taxiway were completed at an estimated cost of $40m. In 2008, a six-storey garage was constructed. The parking garage and terminal lobby were upgraded in 2009 by investing $26m and $10m, respectively.

"Atlantic City airport’s expansion began in 2005 as part of a long-term improvement programme, and major works were completed by 2009."

The expansion of the terminal apron began in 2008. The construction contract was awarded to AE Stone, and the subcontractor for the project was L Feriozzi. The apron expansion work, which was divided into part A and part B sections, was completed in 2010.

Part A included pavement of apron and other electrical work related to airfield lighting and signage. Part B works included electrical works, FAA cable relocation and widening the apron.

In December 2009, Argus Development Corporation won the contract to build a 135-room hotel at the airport.

In April 2010, Philadelphia-based Hunter Roberts Construction was awarded the contract for the terminal expansion works. SJTA is financing the project through revenue bonds and $4m from the Casino Reinvestment Development Authority.

Newark Liberty Airport is owned by the City of Newark and operated by the Port Authority of New York and New Jersey (the Liberty name was adopted to remember the 11 September 2001 atrocity).

SJTA began work on the $25.1m terminal expansion in January 2011. The programme included improvements to the apron, gate facilities, waiting areas, baggage claims and retail space. The parking garage, which already consists of 1,400 spaces, was further expanded with an investment of about $24.5m. In addition, $25m was allotted for a federal inspection station that will allow the airport to handle international flights. The construction was completed in November 2012.

In October 2011, construction of a new 45,000ft2 aircraft rescue and fire fighting station was initiated. The project includes the construction of multiple vehicle bays and administrative staff living areas. The building work will be completed by May 2013. The cost of the project is estimated at $14.3m. In September 2012, $727,732 in federal funds was granted for the project.

Atlantic City International Airport has a single terminal, featuring a small layout that offers an alternative to Philadelphia International Airport. The lower level of the terminal consists of check-in counters, a gift shop, rental-car offices and a baggage claim with two carousels. There is a TD Bank ATM inside the terminal, and Wi-Fi is available throughout the terminal for public use. The airport also provides conference rooms, eateries, news-stands and baby changing rooms.

"Atlantic City International has a single terminal, featuring a small layout that offers an alternative to Philadelphia International Airport."

The prime consultant for the project was Arora Engineers, the design-build contractor was Infax and the Sheward Partnership provided design support. The flight information display systems came from Infax.

Atlantic City International Airport has two runways, 4/22 and 13/31. The runways are both 46m wide, and 1,873m and 3,048m long, respectively. Both are surfaced with concrete and asphalt.

The capacity of the car park is 1,400 spaces, with an extra 100 spaces provided if the lot is full. Some of the parking spaces are allocated for disabled travellers.

Shuttles, taxis and limousines offer ground transportation, with shuttles connecting the arrival and departure points. Buses and trains such as the Atlantic City Express Service also serve the airport.

The South Jersey Transportation Authority will connect the airport with the Atlantic City Expressway by building a new link road. Work will begin in early 2013.