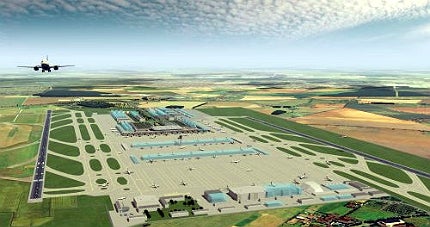 Birmingham Airport in the UK, together with a coalition of Midlands councils and business leaders, has unveiled a 50-year expansion plan, which could transform it into a bigger hub than Heathrow.

The proposal involves the addition of a new terminal, incorporating the HS2 fast rail network and adding a second runway, which will allow the airport to boost its passenger capacity to around 70 million passengers and air transport movements to 500,000 per year.

Plans also include the development of a business park for Birmingham’s manufacturing sector together with an expanded airport site.

The European Union (EU) has launched an investigation into whether Germany violated EU environmental-protection laws while planning flight routes at the new Berlin Brandenburg Airport.

The French Government is planning to reduce its stake in Aeroports de Paris (ADB), the owner of Paris’s Charles de Gaulle and Orly airports, by selling off shares worth €690m.

The French state currently owns about 54.5% of ADP, while the state-sponsored strategic investment fund FSI holds another 5.6%.

A strike by French air traffic controllers (ATC) protesting against the European Union’s (EU) plans to liberalise civil airspace and lower air-traffic charges has affected thousands of flights across the continent and forced cancellations of more than 60% of flights in France.

The stike has led to the cancellation of more than 3,000 flights across Europe, with more than 2,000 in France alone, as more workers joined the two-day strike that ended on 12 June 2013.

The union for ATC said that 11 countries have participated in the strike, with France witnessing the biggest walkout, which also saw a ripple effect on other European nations.

The strike comes in response to plans by EU regulators to spread out their powers to reduce air-traffic charges and cut down flight routes in the union, challenging national controllers.

Part of the SESAR programme, TOPFLIGHT will allow NATS and its project partners to reassess and gather feedback on the feasibility, benefits and scalability of the SESAR concept, with minimum fuel consumption and reduced CO2 emissions.

The SESAR joint undertaking co-funded project involves trialling up to 60 British Airways (BA) flights, during summer 2013, to assess factors including push-back time, climb and descent profile and routing in a bid to mimimise emissions and boost efficiency.

Initial flight trials kicked off during late May 2013 between Heathrow and Canada, following six weeks of cockpit simulation work.

Filed in a Singapore court where arbitration proceedings are to be heard, the final order in the issue is anticipated to reach its conclusion by late March 2014.

The Maldives Government said that the termination of GMR’s contract in November 2012 was based on a paper presented on the technical, fiscal and economic issues.

The commissioning marks the beginning of system validation testing, which is being done by Deutsche Flugsicherung (DFS) together with EUROCONTROL and other members of the project team.

Deployed as part of the Single European Sky ATM Research (SESAR) programme, the new satellite-based landing system is expected to boost signals from the Global Navigation Satellite System (GNSS), making them precise and reliable to deploy during aircraft approaches and landings.

Several major airport expansion and modernisation projects were announced in the Middle East and US in May.