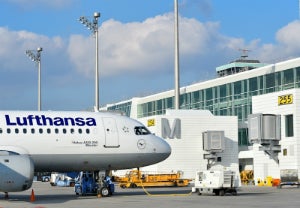 The extended baggage handling system provided by Siemens Postal, Parcel & Airport Logistics GmbH (SPPAL) has successfully completed its three-month test phase at Munich Airport (Germany). The system is at the heart of Terminal 2 (T2) and the new satellite building, which is due to open in spring 2016.

The new satellite building is a structural extension of the existing baggage sorting hall on the apron east of T2. The terminal and its satellite are operated by a joint-venture of Flughafen München GmbH and the German airline Lufthansa AG. Munich Airport was used by almost 40 million passengers in 2014, taking it to place seven in the European airport rankings.

Thanks to the new satellite, Munich will gain an additional capacity of eleven million passengers a year. To accommodate passenger growth, Siemens has modernised and extended the baggage handling system by almost 7km to an overall length of 45km. This increases the sorting capacity by one third to 17,800 bags per hour. The so-called left behind index (LBI), the percentage of temporarily mislaid bags, is as low as 0.02% in Munich. The level of security and reliability for passengers is therefore significantly higher than at comparable airports.

"With our satellite we offer passengers an optimum infrastructure and a unique ambiance", explained Marco Butz, Manager Processes and Central Infrastructure of the Terminal 2 operating company. "The baggage handling system with innovative Siemens technology plays a major part in enhancing passenger convenience. We maintain the minimum connecting time of 40 minutes between flights; this ensures Munich’s place among the world’s leading international airports."

This project demonstrates Siemens’ expertise with so-called brownfield contracts, i.e. modernising and extending existing facilities. Beside the close co-operation with the customer, the involvement of all interest groups, such as airlines, security authorities, ground handling operators and construction firms, was crucial to the success of the project. During the whole project, Siemens made sure that passengers were not affected by the conversion work and regular airport operations continued to run as smoothly as usual.

Siemens has been Munich Airport’s reliable service partner for the system’s entire lifecycle since 2003. The experienced and highly qualified Siemens team was also on site during commissioning and will continue to be responsible for operation and maintenance 24 hours a day in the future. Preventive maintenance is of paramount importance in Munich to avoid system downtime and operation interruptions. This high service quality played a critical role in allowing T2 to successfully and reliably handle around 14 million bags in 2014 alone.

The outstanding service, appealing, modern ambiance and the great passenger convenience at Munich Airport have received a number of awards already. In early 2015, Munich was selected as the first five-star airport in Europe. The ratings awarded by London-based air travel research institute Skytrax are regarded as the Oscars of air travel. Also rated by Skytrax, Munich has been in the top ten world’s best airports for many years.