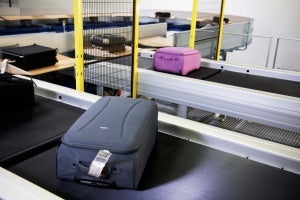 The CrisBag tote-based conveyor system enables airports to minimise screening times and increase security by allowing baggage to remain in the tote throughout the entire screening process using TSA-approved in-line baggage screening systems. A contract to install CrisBag has already been awarded to Crisplant by Düsseldorf Airport, where CrisBag will be used to link three existing terminals. The integration of in-tote screening within the CrisBag system will help Düsseldorf Airport comply with the new EU Standard 3 for enhanced screening and security.

On-stand videos at Passenger Terminal Expo 2012, will also demonstrate Crisplant’s new LS-4000econ sorter, and the BEUMER autover® intelligent DCV baggage handling system. The LS-4000econ enables the integration of an automated, high-speed baggage handling system into airports which need to minimise space. It combines a very small and flexible footprint with the industry’s most energy-efficient drive technology which can reduce energy consumption by 75% compared to conventional drive systems. BEUMER’s autover destination-coded vehicle (DCV) baggage system also minimises space by providing easy customisation of standard,
off-the-shelf modules to create a system for conveying, storing and sorting baggage at speeds of up to 10m/s and with an optimised drive system which delivers high tracking and traceability rates.

The new graphical user interface (GUI) for the BG software suite allows airports to integrate control of the entire baggage-handling process through a single system with easy-to-use graphical screens.

BEUMER Group brings together two powerhouse brands within baggage logistics – Crisplant and BEUMER. Together their combined experience covers designing, manufacturing and integrating high-speed baggage handling systems for airports around the world, with a proven support network for the ongoing operation and maintenance of these systems. The complete range includes tilt-tray sorters, tote-systems, DCV-systems and conveyors as well as IT and software controls.

Crisplant will be on stand number 6210 at Passenger Terminal Expo 2012.