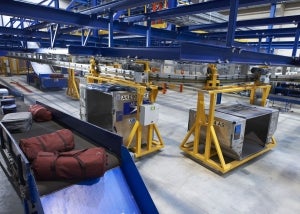 The on-stand demonstration will feature a section of the CrisBag system, which was developed by BEUMER Group company Crisplant. The system uses the ‘one bag per tote’ concept to enable each item of baggage to remain in the same tote from check-in, through the sorting and screening processes. CrisBag’s modularity and easy integration into new and legacy systems is combined with adaptive static and dynamic tote-tilting at baggage discharge to provide high levels of operational and energy efficiency. The CrisBag system, which has already been installed in international airports such as Munich, Helsinki, Singapore and Calgary, was recently chosen for Abu Dhabi International Airport’s new Midfield Terminal project.

BEUMER Group Middle East’s experts in baggage handling will also be on-stand to introduce their new automated container handling system, designed to transport loaded ULDs between destinations in the airport and divert empty ULDs for parking or maintenance. The system is controlled by management software that communicates wirelessly, in real-time, with each ULD carrier, constantly monitoring its destination, position and progress to provide 100% traceability.

"BEUMER Group will be at the German Pavilion, stand 7105, at the Dubai Airport Show 2014, held at the Dubai International Convention and Exhibition Centre."

The innovations to be showcased by BEUMER Group make it possible for airports to plan the loading process efficiently using a batch-building and speed-loading system. This allows baggage handlers to open up a position, load bags, close it again and continue with other tasks. Batch-building switches baggage handling from a push to a pull system, a concept that is receiving much attention in the baggage handling industry.

BEUMER Group is a global company, working with airports around the world through a network of local offices. These are essential for providing close partnership and effective communication with customers worldwide. BEUMER Group Middle East recently opened a new regional office in Qatar to complement the Dubai and Abu Dhabi offices in UAE.

BEUMER Group will be at the German Pavilion, stand 7105, at the Dubai Airport Show 2014, held at the Dubai International Convention and Exhibition Centre.