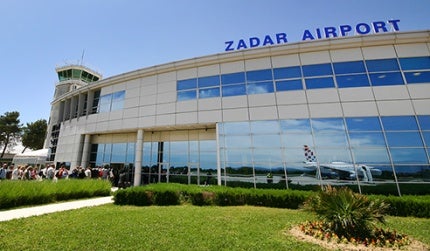 Zadar International Airport is one of the major airports in the Republic of Croatia. It is located in Zemunik Donji municipality, 8km away from the city of Zadar. The airport was opened in 1968. It is operated by Zadar Airport.

A Ryanair airline base was opened at the airport in April 2013. The base enhances passenger traffic at the airport by 60%. The airline provides service to 16 European destinations including Germany, Ireland, the UK, France, Belgium, Denmark, Sweden and Norway. The base was built at a cost of €1.4m ($1.8m).

The project also includes reconstruction of the air traffic control tower, runways and other facilities at the airport. It is expected to be completed by the end of 2013.

The general and business terminal will handle the passengers during the main terminal reconstruction.

The airport has one main terminal building and a general and business aviation terminal. The facilities at the main terminal include international and domestic arrivals, five gates, nine check-in counters, and two self propelled conveyer belts.

John Paul II International Airport, the second busiest in Poland, is located near Kraków, in the village of Balice, 11km west of the city centre.

The general and business terminal is located at the right side of the main terminal building. It is a two-floor building. The ground floor features a passenger handling area with a cafe bar and places for refreshment and relaxing. The first floor features apartments to provide passengers and the crew with a break before reaching their final destination.

The airport terminals have a capacity to handle about 300,000 passengers in a year. Passengers can access wireless internet from any part of the airport.

The airport also has one cargo terminal.

The airport has an air traffic control (ATC) tower with an altitude of about 2,896m. It also features an approach control station.

In October 2012, Si ATM was awarded a contract to supply and install an ATM radar emergency system at the airport.

The airport has a cargo storage capacity of 3,500t. It has a 700m² warehouse, which provides refrigerated and deep freeze storage for fresh meat and livestock.

Public transportation buses to and from the airport are provided by Liburnija. Public transport buses are available from the front gate of the international arrival terminal.