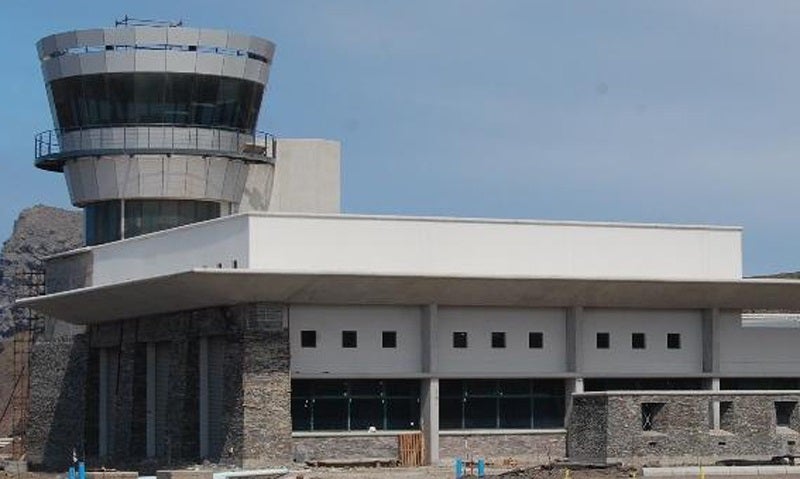 Saint Helena International Airport is a green field airport constructed in the British Overseas Territory of Saint Helena in the South Atlantic Ocean.

The airport is owned by the Saint Helena Government (SHG) and operated by Basil Read in partnership with Lanseria Airport as part of a ten year contract.

The new airport project was approved by the UK Government in 2011. Construction started in 2012 and the airport was opened in 2016. The Saint Helena airport welcomed its first scheduled commercial flight in October 2017.

Travel to the island from Cape Town, South Africa, would take seven days on the RMS St Helena, the only means of travel to and from the island. The airport significantly reduces travel time from Cape Town to five hours.

In addition to providing air access, the airport also addresses some of the socio-economic problems of St Helena and makes it financially independent.

The new airport features two main buildings, namely a passenger terminal building and a combined building, as well as a number of smaller ancillary buildings.

The combined building was the first facility constructed at the airport. It houses a number of auxiliary functions required for the airport operations, including air traffic control, rescue and firefighting services, and a meteorological office.

Construction of the 2,500m² terminal building started in June 2014.

The ancillary buildings include a generator compound, an access control building and a storage compound.

The project also included the construction of a 14km access road connecting the airport to the Rupert’s valley, a new waterfront in Rupert’s, a bulk fuel installation in the valley and an inshore sea rescue facility.

The runway is capable of accommodating Code C aircraft such as the Boeing 737-700 or Airbus 319. It is accompanied by aprons for two aircraft, taxiways, and a bulk fuel installation for six litres of diesel and aviation fuel.

South African construction firm Basil Read has been appointed as the design build and operate (DBO) contractor for the airport in November 2011.

The DBO contract involved a design and build phase of four years, and enables the company to handle the airport operations in partnership with Lanseria Airport for a period of ten years.

The scope of the DBO contract included construction of the entire airport infrastructure and facilities. During the operations phase, the company will provide all the required services such as air traffic control, and training and deployment of firemen.

All the raw material required for the airport construction was transferred to the island on a 2,500t ship specially chartered by Basil. The company also constructed berthing and uploading facilities to facilitate the same. It employed more than 600 people during the construction phase, while more than 100 off-island personnel were involved in logistics, design and support functions.

“The airport will also address some of the socio-economic problems of St Helena and make it financially independent.”

Other contractors involved with the project include Halcrow, which offered project management services, and Penspen, the fuel management contractor for managing bulk fuel installation and airport fuel facility (AFF). South Africa-based KMH Architects designed the terminal building and other facilities for the project.

Funded by the UK Department for International Development (DFID), the project is the biggest single investment made by the government in St Helena Island.

A facility with designated parking spaces for private vehicles, motorcycles, buses and taxis is located outside the terminal building. The facility also provides disabled-access parking.