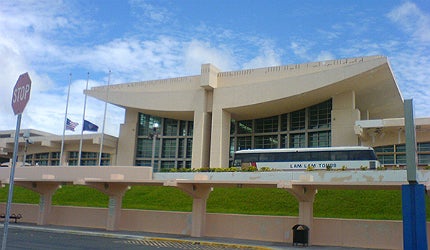 Antonio B. Won Pat International Airport is located in Guam, a territory of United States. It is the principal airport for providing passenger and cargo links between Guam and the US, Asia, Australia and several islands in the Pacific region.

The airport is located at the heart of Guam’s business district, at a distance of three miles east of the capital city Hagatna. The airport is operated by the Guam Airport Authority (GAA). It handles approximately 2.8 million passengers a year.

The airport has a single passenger terminal. The 768,000 square feet building is divided into arrivals and departures areas.

The ground level accommodates the arrivals area, while the apron level accommodates departures. The concourse level has west and east gates numbered from four to eight, and from nine to 20 respectively. It also features an immigration office, security checkpoints and food and drink stores.

Past expansions of the international airport

In January 1976, the GAA took over operational authority of the terminal from the Department of Commerce. An Airport Expansion and Improvement Project plan was drafted in 1977. Construction on a new terminal was commenced in October 1978. The terminal was opened in January 1982.

"The airport is located at the heart of Guam’s business district, at a distance of three miles east of the capital city Hagatna."

A five year capital improvement programme was approved by the board authorities in the 1980s. This consisted of construction of an airport access road, extension of the concourse, departure lounge and apron parking and construction of a parallel taxiway. The access road was opened in 1988.

The airport’s master plan was updated in February 1989. The commuter terminal became operational in August 1991. Three new loading bridges and parking aprons were added to the terminal with an investment of $6.2m.

A public parking lot with 710 parking spaces, an automated baggage system with a capacity to process 120 bags a minute, four sets of moving walkways parallel to the concourse, a large new customs and immigration hall and new flourished retail space were added as part of this expansion. The second phase of terminal expansion was completed in August 1998.

A $1.2m express package facility was opened at the airport by DHL Worldwide Express in 2005. In the same year, Continental Micronesia upgraded its maintenance hangar at a cost of $3.5m.

A $3.6m Seismic Zone Upgrade programme was initiated at the airport in 2007. An International Baggage Transfer Facility worth $4.95m was unveiled in December 2008.

A new 130,000 square feet Integrated Air Cargo Facility built under a public private partnership with PacAir Properties was opened at the airport in August 2009. It was built at a cost of $26.5m.

"The airport is operated by the Guam Airport Authority (GAA). It handles approximately 2.8 million passengers a year."

The airport appointed ASIG to upgrade the baggage handling system which was installed in 1996. The old system has become inefficient time. ASIG has introduced a flexible bar code reader system that has a bar code scanner, which will improve the efficiency of the system.

Screening and security, runways and parking

The US Transportation Security Administration (TSA) will deliver two Advanced Imaging Technology machines to the airport for screening passengers boarding the aircraft. These machines will be embedded with automated target recognition software and will extend privacy by eliminating passenger scanning and imaging. The airport has two runways (6L/24R and 6R/24L). The length of the runways is about 3,053m. Federal Aviation Administration (FAA) granted $4.8m for the rehabilitation of runway 6L/24R in June 2009.

A public parking lot with both short term and long term parking facilities is located just outside the West Arrival terminal building of the airport. It is operated by PacAir Services.

Chicago O’Hare (ORD) is one of the busiest airports in the US, being a major international and domestic hub for some of the largest carriers in the world (including United Airlines and American Airlines).

Juneau International is a public airport serving the city of Juneau, the capital city of Alaska, US.