The COVID-19 pandemic has cast doubts on the future prospects of businesses as customers remain wary of spending amid uncertainty.

Verdict has been running a poll to assess the business optimism during COVID-19 as reflected by the views of companies on their future growth prospects amid the pandemic.

Analysis of the poll results shows that optimism regarding future growth prospects has been improving since June, after being low during the early days of the pandemic.

The business optimism levels improved to 61.4% during the three months between June and August, compared to 45.3% witnessed between March and May.

Respondents who were pessimistic about their future growth prospects reduced to 24.11%, on an average, during the three-month period from June to August, from 32.74% during the March to May period. 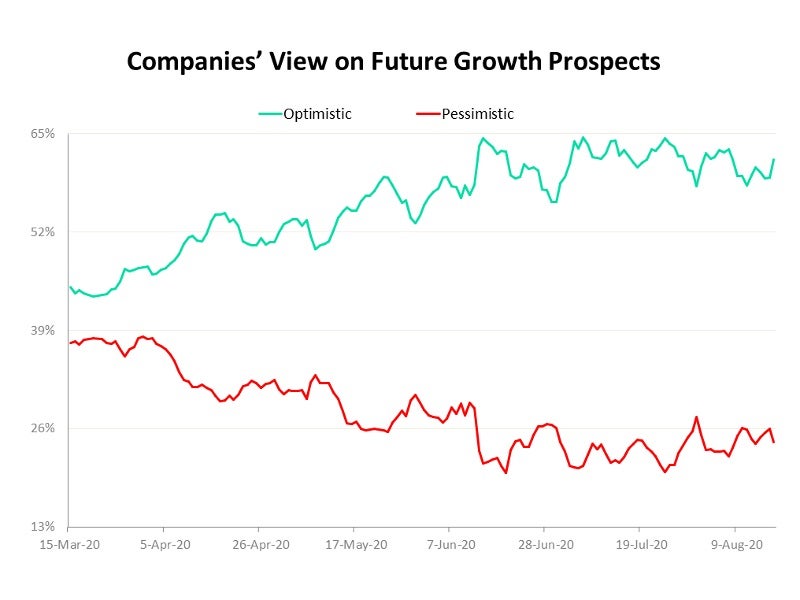 The analysis is based on 31,927 responses received from readers of Verdict network sites between 15 March and 02 August.

Business optimism amid the COVID-19 pandemic

The economic downturn caused by the COVID-19 pandemic is being compared to the Great Recession and the Global Financial Crisis of 2008. Although the full extent of the damage caused by the pandemic is yet to be known, the initial projections of an inevitable downturn have now turned to moderately positive as economies begin to reopen.

The highest business optimism has been recorded among small and medium businesses (SMBs). A study conducted by Hewlett-Packard among 1,600 Asia-Pacific SMBs between May and June indicated that the businesses not only expect to survive but thrive despite the harsh economic environment.

Technology has been a major factor in driving optimism among the business community as it has helped in remote working ensuring business continuity. Based on the experience of the 2008 recession, some companies expect an increase in business activity with access to new markets and a shift in supply chains towards domestic suppliers.

Low-interest rates combined with fiscal and monetary aid provided by governments are the other factors expected to drive growth.

Further, improved treatment options for the COVID-19 virus and success in early vaccine trials are making businesses optimistic about the future. These developments indicate that the pandemic may be controlled more effectively going forward thereby boosting sales and demand, according to Staffing Industry Analysts, a staffing and workforce solutions advisor.

04 Mar 2021
Registration is disabled.
We use cookies to ensure that we give you the best experience on our website. If you continue to use this site we will assume that you are happy with it.ContinueLearn more
Recommended article