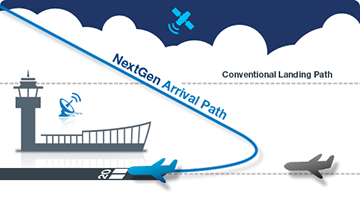 The US House of Representatives has approved a bill to pay $63bn for Federal Aviation Administration programmes up until 2015, which will speed up the transition of air traffic control based on GPS technology.

The bill will also provide funds for airport construction and expansion, upgrading air traffic control systems and an expansion of the use of unmanned drones in domestic airspace.

It will help upgrade commercial navigation from a radar-based aircraft control system to Global Positioning System-based technologies, allowing planes to glide in more steeply with their engines idling, instead of time-consuming, fuel-burning stair-step descents.

US House Transportation and Infrastructure Committee chairman John Mica said: "This measure is key to advancing the nearly 8% of our nation’s economy impacted by the aviation industry."

"This sets the policy for taking us into the next generation of air travel so our planes can fly safer in the skies, so that we have the ability to save fuel, so that we can get from point to point and know where our aircraft are both in the air and on the ground," Mica said.

Under the proposal $16bn will be allocated per year to the FAA, which includes $38.3bn investment in operations, $13.4bn for the Airport Improvement Programme, $10.9bn for facilities and equipment, and $672m for research and development.

The bill includes $1bn in funding for FAA’s Next Generation air traffic modernisation programme, roughly the same as the past two years.

FAA’s NextGen air traffic control system will allow pilots to know exactly where other planes and obstacles are, facilitating more frequent landings and takeoffs and fewer delays and diversions.

The system is one of the FAA’s key goals to accommodate a predicted 50% increase in air traffic over the next decade.

Under the initiative, the new procedures for the nation’s 35 busiest airports will have to be completed by June 2015.

Image: The upgrade to GPS-based aircraft control systems is expected to allow planes to land in a more efficient way. Photo: FAA.