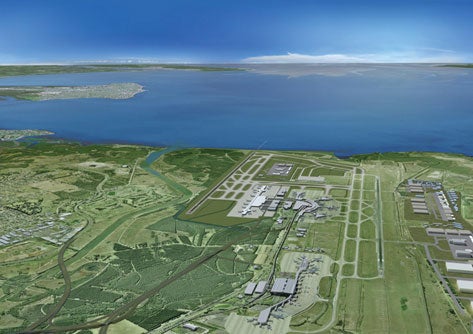 Brisbane Airport (BAC) will begin the construction of its second runway from July 2012, under the $1.3bn New Parallel Runway (NPR) project.

The NPR project was originally approved by the Australian Government in September 2007, but was delayed due to a reduction in passenger numbers during the global financial crisis.

Brisbane Airport CEO Julianne Alroe told the Brisbane Times that work to build the 3,300m runway bed into Moreton Bay will start in the second half of 2012.

"Because of the quality of the land at the airport, which is an old river mouth, it will be a very long and slow build," Alroe said.

"The first stages of the runway will start at the end of this year and we expect to see the runway in operation by 2020," she added.

The NPR project also comprises associated taxiways, navigational aids and land-based access infrastructure to be built within the boundaries of Brisbane Airport.

The area allocated for sand filling and runway construction at the airport is about 475ha.

BAC has secured financing for the first stage of the NPR project and will raise further funds from a group of various equity and debt contributions.

The new runway construction will allow the airport to meet future capacity needs through the delivery of a safe runway system and airspace architecture.

Image: A design render of the airport with its new runway. Photo: Brisbane Airport.