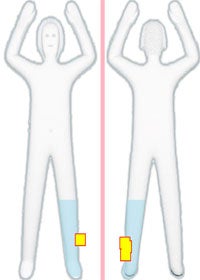 The Australian Government is planning to deploy new millimetre-wave body scanners across the country's international terminals from July 2012 under the A$200m Strengthening Aviation Security Initiative.

The government is considering introducing legislation this week to roll out the systems across airports after a trial of the technology at Sydney and Melbourne airports.

Under a A$28m package, the system will be introduced at Australia's eight international airports in Adelaide, Brisbane, Cairns, the Gold Coast, Melbourne, Perth and Sydney from July this year.

Federal Transport Minister Anthony Albanese said: "The machines only produce a generic outline to display the location of metal and non-metal items under clothing," Albanese said.

To protect people's privacy, the machines produce only a basic image that identifies items under clothing without creating an accurate image of the passenger's body, and images will not be stored or copied.

The Australian government said the new scanners emit millimetre wavelength rays which are 10,000 times weaker than a mobile phone signal and are considered safer than the backscatter x-ray scanners used at other airports.

The proposed Aviation Security Amendment (Screening) Bill 2012 will require passengers departing Australia to pass through a body scanner as part of standard screening processes; refusal to do so will mean travellers will be unable to fly.

Under new legislation, there will exceptions for travellers with serious medical conditions.

Australia has selected L-3 Communications for the supply of the new millimetre-wave body scanners.

Image: The new body scanners will produce a generic outline to display the location of metal and non-metal items under clothing with no discernible features visible. Photo: Australian Government.

US to award $335m for airport improvement works