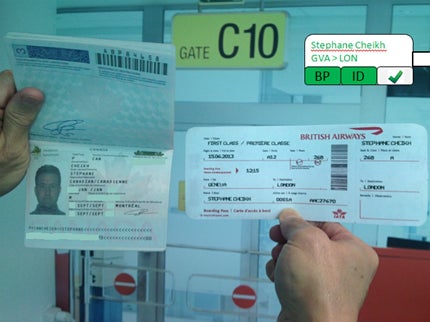 In the last five years, internet-enabled smartphones and tablets have overrun virtually every part of our private and public lives, and air travel is no exception. The exponential growth of smartphone ownership has shrunk the online world to fit comfortably in our pockets, which in turn has driven demand for new ways to interact with the world’s airlines and airports, from remote check-in and mobile boarding to live flight updates and airline apps. As Francesco Violante, CEO of air transport IT specialist SITA, said back in 2011: "We are now entering the era of the mobile-centric passenger."

"A watch linked to a passenger’s smartphone could make it easier to access messages from airlines."

But as technical innovation marches on, it’s becoming clear that smartphones and other handheld devices might not be the ultimate expression of this mobile-centric era of air travel. After all, reaching for a phone in your pocket, as convenient as it is, can’t quite match the accessibility of having the same information strapped to your wrist, or even floating in your line of sight.

Wearable computing devices have been gradually picking up steam for the last year or so, most notably smart watches and smart glasses (Google Glass being the most well-known example of the latter), and Credit Suisse expects the sector to explode in the next three to five years, with the market’s value predicted to increase tenfold to around $50bn.

SITA, through its technology research division SITA Lab, has been taking a more detailed look at the potential of wearable smart tech for airport operations, as well as carrying out early-stage trials on the effectiveness of smart eyewear for passenger processing. Its findings, published in mid-October 2013, tout the possibilities of wearable computing, while also sounding a few cautionary notes.

The potential of wearable computing

Although smart watches were not the main focus of SITA Lab’s study, the report did conclude that this emerging wearable technology could prove useful for travellers. A watch linked to a passenger’s smartphone, for example, could make it easier to access messages from airlines by eliminating the need to root around for a phone in hand luggage and minimising the chance that important updates are drowned out by the hubbub of a busy terminal.

"Once the conceptual hurdle of smart glasses is overcome, the possibilities seem endless."

In many ways, the impact of smart watches on the air travel sector is likely to act as an extension of the benefits brought by their smartphone predecessors, bringing incremental conveniences that increase as the products become more popular over time. With smart watches available from manufacturers like Sony, Samsung and Kickstarter success story Pebble Technology, and Apple’s secretive iWatch reportedly looming just over the horizon for 2014, the smart watch market could certainly surge quickly enough to drive their use in airports.

Nevertheless, it’s the smart glasses that have the potential to introduce truly disruptive change to the air travel landscape if they are embraced by airlines and airport operators. Based on tests using preview versions of Google Glass and the Vuzix M100, SITA Lab’s study identified a number of areas that could be enhanced by the introduction of these head sets and their ability to perform processing tasks, capture video, communicate through wireless networks and show information on a heads-up display (HUD).

"Wearable devices like Google Glass offer new opportunities to mobilise staff, keeping their hands free, while keeping them connected to the traditional check-in and reservation systems," said SITA’s chief technology officer Jim Peters. "Interaction can be via video analysis of what a staff member is looking at, like a boarding pass or bag tag, or voice recognition, or a combination of both."

Once the conceptual hurdle presented by smart glasses is overcome, the possibilities seem endless. The report highlights the hands-free advantages for aircraft maintenance and turnaround: "The mechanic can communicate directly with database systems and sensors to perform step-by-step replacement of parts, while having both hands to do the work. This could speed up turnaround times and make maintenance work far easier and safer."

The report draws attention to possible improvements in customer service, as airline check-in staff would be able to remain engaged with passengers while pulling up information, and even use voice recognition software to translate unfamiliar languages in real-time on the HUD. SITA’s team also ran a successful test using smart glasses to scan luggage tags and retrieve lost baggage information from airline baggage database WorldTracer.

As with any early technology, wearable connected devices require significant development and market maturation before they’re ready to get stuck into airport operations.

"SITA Lab found that their pair of smart glasses was limited to around 30 minutes of activity."

One of the largest aspects of SITA Lab’s study was the development of a prototype smart eyewear-enabled boarding system dubbed SWIFT Boarding, which used devices’ built-in cameras to simultaneously scan passenger boarding passes and passports to verify that they match.

Although the trial was a success as a proof-of-concept, the devices proved unable to process the information fast enough to meet the airport indsutry’s one-second verification benchmark, meaning that more powerful smart glasses will need to be developed before they are suitable for this core function.

More general issues have been highlighted as well, including enhanced camera quality to operate in variable lighting conditions, the need to reduce costs and improve robustness, and the potential strain that hundreds of connected devices could place on wireless networks. "Importantly, battery life is currently not long enough," the report points out. "SITA Lab found that their pair of smart glasses was limited to around 30 minutes of activity. However, this is likely to improve. According to Credit Suisse, battery power could increase by a factor of 2.2 by 2020."

And away from technical obstacles, there remain some cultural stumbling blocks to overcome, both for passengers and staff. Customers may feel that in-built cameras attached to the glasses of airline staff are an invasion of privacy, while a US survey by Cornerstone OnDemand revealed that 42% of workers would be unwilling to use wearable technology as part of their job role.

"It is no major surprise that our research into this developing technology shows that there are issues to address," said Peters. "This is inevitable with any new technology. SITA Lab saw some of the same challenges when testing the first smartphones several years ago."

By drawing a parallel between the wearable tech of today and the early days of smartphone development, SITA is clearly optimistic that this new wave of personal devices could catch on in a similar way in the airport environment.

Given enough time, investment and creative new applications, there’s every chance the company will be proven right and the face of airport operations will be changed forever. And for once, that change will be literal.

A retail revolution – new strategies from London’s Gatwick and Heathrow

Forecast spending for 2012 has been lowered as government officials confirm the UK will pull out of Afghanistan by 2014.The journey from check-in to security at Gatwick Airport is lined with advertising that does not just simply promote the stores on "the other side", it makes the passenger feel as though what is to come will be special, exclusive and far better than what they experience in everyday lives.