London’s Heathrow Airport is Europe’s busiest airport and the second in the world, with 71 million international passengers passing through a year. However, its current size of 12.27km² restricts its capacity. Expansion plans have been discussed by successive UK governments as far back as the late 1970s.

The vote by MPs this week finally approved a new third runway, which would add an estimated 3km² to the site. This would take the airport’s total surface area to approximately 15km². The project is estimated to cost £14.3bn.

The project has proven controversial due to the planned demolition of 800 homes in the villages of Longford, Harmondsworth, and Sipson. A tunnel for the M25 will be built, which is expected to cause widespread disruption for motorists. Environmentalists have expressed their disapproval of the expansion, citing concerns about emissions. Questions also remain about the costs of proposed rail links.

A judicial review has already been launched against the approval by Wandsworth, Richmond, Hillingdon and Hammersmith and Fulham councils with the support of charity Greenpeace and London Mayor Sadiq Khan. The parties claim that the expansion would damage the environment and health of the public with increased air pollution.

France’s third-biggest airport Paris Orly has an overall area of 15.3km². Located 13km south of Paris, it was the capital’s main airport before Charles de Gaulle took on much of the international traffic.

Despite this, the airport still handled more than 32 million passengers in 2017 and it is France’s busiest airport for domestic travel. It is managed by Aéroports de Paris, which also operates the larger Charles de Gaulle Airport.

There are two terminals at the airport, Terminal Sud and Terminal Ouest. Terminal Sud in the south is mainly used for shorter domestic or European flights. It features a steel and glass design with six floors.

Terminal Ouest in the west handles long-haul flights to destinations across the Atlantic. The terminal has a different design, featuring only two floors with four sections extending from the main building. 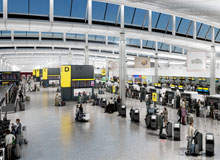 The top 10 busiest airports in the UK

Munich Airport is Europe’s only airport to be rated five-stars by air transport ranking organisation Skytrax, maintaining its high quality from the first award in 2015 to its renewal in March 2017.

A number of activities are on offer for passengers spending their time at the airport, including mini-golf, a stationary surf wave, a brewery, and Napcabs, as well as a Christmas market.

The airport has a Visitor’s Park with its own railway station for sightseers. It features a Visitors Hill for a view of the apron, as well as a display of three historic aircraft. On the roof of Terminal 2, there is a Visitor’s Terrace with a balcony and seating areas for both passengers and the public.

Lyon Saint-Exupéry Airport spans 21km² and is 13km away from Lyon. There are a number of convenient transport links to Lyon, including environmentally friendly electric rental cars and a 30-minute direct tram.

Originally named Lyon Satolas Airport, it was renamed in 2000 after Lyon-born pioneering aviator and writer Antoine de Saint-Exupéry on the centenary of his birth.

There are three passenger terminals at the airport, as well as one freight platform. The airport aims to expand to four runways from the current two to increase its capacity. In 2017, the airport handled ten million passengers.

Frankfurt Airport is Germany’s biggest airport, covering 23km². It features two main terminals, which saw 64 million passengers in 2017. It is the busiest cargo airport in Europe, handling more than two million tonnes in 2017.

The airport has a 1,800m² dedicated Visitors’ Terrace at Terminal 2 for aircraft enthusiasts to view the runway without going through airport security. It is also available to passengers awaiting departing flights.

Fraport, the airport’s operator, is planning the construction of a third terminal to increase passenger capacity to 90 million by 2023, as well as an extension of the SkyLine people-mover to the new terminal.

In 2011, the airport opened a new runway to increase the total number of movements per hour to 90. This was aimed to bring Frankfurt in line with other airports in Europe, which already have the same hourly capacity, with the potential to expand to 120 movements.

Amsterdam Airport Schiphol covers 27.87km² with one main terminal building and six runways. It is the world’s fifth busiest international airport in terms of traffic, serving 319 destinations. It handled 68 million passengers in 2017 through 496,748 aircraft movements.

The airport is designed as a single-terminal concept with three departure halls. In 2016, an expansion was started to build a new pier and terminal, which will increase the airport’s annual passenger capacity to 14 million by 2023.

The airport’s expansion project has faced difficulties due to limited space. The new terminal is being built to the south of the airport on the site of a demolished car park with a connection to the main building. The road network around the airport is also being modified to facilitate construction, including relocation of parking facilities from the demolished site.

Leonardo da Vinci International Airport has an overall area of 29km², built to ease growing traffic at Rome Ciampino Airport. It opened officially in January 1961, but was used to help meet a passenger influx during the 1960 Olympics, which Rome was hosting.

A project to make the airport more environmentally friendly is underway, creating a combined heat and power generation system. An expansion to the loading bridge is also planned to increase the capacity to 55 million passengers.

Masterplan Fiumicino Nord is a €4bn development plan that was recently awarded to build four new terminals and two new runways to increase annual capacity to more than 80 million by 2044.

Madrid-Barajas Airport is located on 30.5km² of land within the city limits of Madrid, Spain, 9km from the financial district. In 2017, approximately 53 million passengers passed through the airport in a total 387,566 aircraft movements.

The 760,000m² Terminal 4 (T4) was built in 2004 to help the airport compete with other main European transport hubs, increasing annual passenger capacity to 70 million. T4 won Skytrax’s award for the world’s sixth-best terminal in 2018.

The airport has five terminal buildings, including the T4 satellite building, and four runways, which allow for up to 120 operations to take place every hour. A white cross is visible on the Paracuellos hill across from the T4 runway, which marks a memorial for victims of the Spanish Civil War in the 1930s.

Located 25km away from Paris, France, Charles de Gaulle Airport has a total area of 32.37km², making it the biggest airport in Europe. A high-speed train link to Paris is planned to be opened by 2023, cutting travel time to 20 minutes from 45 minutes on the current rail route. The airport has road connections to Lille and Belgium.

The airport handled 69 million passengers in 2017, making it the tenth busiest airport in the world with 475,654 aircraft movements in 2017.

In May 2004, almost a year after the new Terminal 2E was opened, a section of its roof over gate E50 collapsed, killing four people and injuring a further three. A report into the incident found that the roof was too fragile, causing the airport’s operator Aéroports de Paris to spend €100m on reconstruction works. The terminal was completely reopened in March 2008.

The airport is currently undergoing several renovations and expansions under the CONNECT 2020 plan to improve road and rail transport links, baggage handling, retail, and hotels.

02 Mar 2021
Registration is disabled.
We use cookies to ensure that we give you the best experience on our website. If you continue to use this site we will assume that you are happy with it.ContinueLearn more
Recommended article