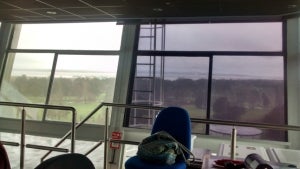 Reflex-Rol, a division of De Leeuw, was recently contracted by the Irish Aviation Authority (IAA) to install its ‘Aviation’ solar and glare control systems in the air traffic control tower at Shannon Airport.

This contract was a direct result of an installation of the Aviation system the company did at Cork Airport some four years prior. Having proved its success over four years the IAA decided to have the same system installed at Shannon.

The installation was completed during March 2014, on time and within budget.

What sets the Reflex-Rol Aviation shading system apart from others?

The Aviation system is not an adaptation of your standard type roller blind/shade. Reflex-Rol Aviation systems are designed and manufactured specifically for the sometimes challenging conditions in an ATCT-VCR.

The system copes with trapezoidal shapes and outward leaning windows without the AR760* material touching the glass and without distorting visibility outward, which is critical in an environment such as a VCR.

Safety is always foremost on the minds of ATC staff and being able to clearly see their computer screens as well as seeing out is a clear safety factor.