In Association with Brabant

With bans on the sale of new petrol and diesel vehicles coming as soon as 2030 in several countries, the charging infrastructure for electric vehicles (EVs) has some way to go before it is capable of meeting demand. Furthermore, there is also the issue of the extra strain on the national grid placed by more EVs being connected to it.

The Netherlands province of Brabant has a long legacy of developing revolutionary technologies across many sectors, which continues to this day in solar-powered electric cars. The concentration of technical universities and businesses across a relatively small area is a significant driver of innovation, accelerated further by the culture of collaboration among experts and innovations that is part of the fabric of Brabant. Then there is the Automotive Campus, which is dedicated to innovations in motoring technologies and contributed to the development of Lightyear's road-ready solar-powered car. And with the advances in more efficient electric batteries already being developed in the region, there will almost certainly be more breakthroughs in technologies for electric vehicles coming out of Brabant in future. To learn more about how Brabant is securing investment to develop the technologies of tomorrow and its history of innovation, download this specially commissioned white paper.
By Brabant 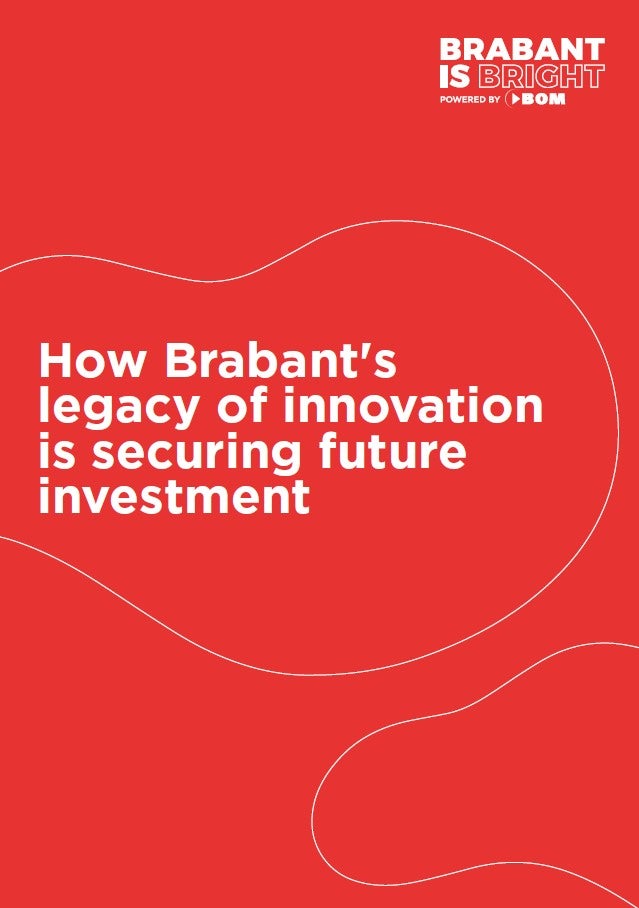 Thank you. Please check your email to download the Whitepaper.

These problems can be avoided thanks to Netherlands-based company Lightyear, which has developed an EV that gets the majority of its energy via solar panels built into the roof and bonnet. The vehicle can go for months without requiring the battery to be plugged in for a charge, meaning that drivers do not have to plan their routes based on access to charge points.

Lightyear began as a student team in Eindhoven competing in the annual World Solar Challenge race in Australia, with the aim to design a solar-powered car capable of travelling 3,000km through the Australian outback.

After competing for several years and refining the technology, the Dutch team became world champions four times and decided to form the company in 2016. Eindhoven Technical University was central to the success of Lightyear, while 100 companies from in and around the province of Brabant sponsored the team in their pursuit of becoming world champions and provided support to develop all the technologies involved. Sponsors included NXP, Axion and Ericsson, with all of them having connections to Brabant.

“We had no budget,” explains Tom Selten, vice-president of business development at Lightyear, who was also team manager of the Technical University’s solar challenge team in 2014 and 2015. “We needed support from the region, from companies who would help us to mill certain products or build the suspension. Every component needed to be developed by the students.”

From talking with other teams involved in the solar challenge in Australia, Selten says this highlighted the difference support from the high-tech ecosystem in Brabant had made to his team and the success of the technology used in Lightyear vehicles.

“In Australia, I was talking to the Iranian team, and they had huge difficulties accessing parts and accessing companies who can help them build a vehicle,” he says. “We have an excellent high-tech ecosystem to build products. With one phone call, you can mill a whole product.”

Brabant’s high-tech ecosystem provides access to specialists from a diverse range of high-tech disciplines, from mechanical engineers to software engineers, all within a very short distance.

“There are so many companies already active in the field of high-tech systems that it is a fertile ground,” adds Selten. “Where Silicon Valley is with their software, I think of Brabant as combining software and hardware.”

The universities around Brabant provide an invaluable breeding ground for start-ups to begin and offer a more sheltered environment for growth. Brabant is also home to the Brainport Automotive Campus, which focuses on developing new technologies for vehicles, which has been important to the development of Lightyear.

However, there does come a point when a start-up must be able to stand on its own and become profitable. Yet, in Brabant, there are bigger companies that can help to enable this with the right investment.

“The region can help massively because if companies like ASML and Philips invest in the next big things, it will create sort of a flywheel of companies who can propel this region towards new heights,” adds Selten.

Lightyear has developed many of its core technologies in-house. For example, the complete drivetrain is integrated into the wheel of the vehicle, providing a significant advantage in terms of efficiency over universal parts available from a catalogue, while the customised solar panels for the vehicles are manufactured in the neighbour Netherlands province of Limburg.

“We have been quite heavily investing the last five or six years on making sure that we own and develop these core technologies in-house, and also that we create smart partnerships with companies who can help us accelerate and de-risk the execution of building a vehicle in high volume,” adds Selten.

In particular, producing solar panels in the Netherlands as a speciality product avoids outsourcing it to other countries where the environmental footprint and ethical working practices may be harder to verify and control.

“We have control over our supply chain,” comments Selten. “So, we know what goes in and what goes out, and what we can also improve and innovate on the production processes.”

The mindset of optimising every facet of the vehicle for energy efficiency in the World Solar Challenge has remained with the company. Lightyear vehicles are designed with aerodynamics in mind to minimise losses in energy conversion. From the battery to the powertrain, every aspect of the vehicle needs to be as efficient as possible.

“Zooming in on the Brainport region, we are well-educated on how to design an optimised system,” adds Selten. “We try to look at the vehicle as a system and understand how it interacts and then try to optimise it, instead of looking at every component and optimising each component.”

Performance of the solar-powered car

The Lightyear 0 vehicle has an acceleration speed of 0–100 kilometres per hour (km/h) in ten seconds and a top speed of 160km/h. Currently, however, anyone wanting to purchase a Lightyear car will have to pay approximately €250,000. This is because the technology is undergoing validation and is not yet available on a commercial scale – but that is set to change.

The goal of Lightyear 0 is to be able to offer the Lightyear 2 to the mass market. In fact, Lightyear 2 is expected to cost €30,000–50,000, making it competitive with other new cars of a similar size on the market. This model is due to be launched in 2025. And Lightyear recently announced successfully raising €81m to accelerate development of this new model, with funds coming from a range of investors – including €5m from the Brabant Development Agency (BOM).

Solar panels on Lightyear vehicles top up the battery throughout the daytime, and unlike the majority of EVs, charging takes place when the Lightyear vehicle is both moving and when parked in the sun.

The Lightyear 0 battery has a practical range of 1,000km between charge points. And while the battery will need to be plugged in for electric charging at certain points, this can be months at a time if the car use is limited to short daily journeys such as a commute or school run. The battery has a daily solar range of 70km, with an annual solar yield of up to 11,000km in sunny climates. However, even in environments that receive less sunshine such as the UK, the annual solar yield is still 8,000km.

There has also been a lot of coverage about the weight of EVs, which are much heavier than petrol and diesel vehicles, largely due to the lithium-ion batteries. However, Selten explains the current Lightyear vehicle being tested weighs around 1,500kg, compared with a similar-sized EV on the market that weighs 2,200kg. This saving of 800kg has considerable benefits for energy consumption.

Another reservation around EVs is the carbon-intensive processes for sourcing raw materials and manufacturing. While EVs may not emit any CO2 emissions once they are driven off the forecourt, their environmental footprint in production can be considerable. Carbon-intensive mining is required for lithium, cobalt and nickel. Furthermore, electricity used for charging EVs may also come from fossil fuels.

However, according to Selten, the next EV that Lightyear is developing will address these environmental issues.

“Our Lightyear 2 vehicle will be optimised for CO2 emissions, to minimise the emissions not only from using the vehicle but also from a production, refurbishing and recycling perspective,” he says.

The Netherlands province of Brabant has a long legacy of developing revolutionary technologies across many sectors, which continues to this day in solar-powered electric cars. The concentration of technical universities and businesses across a relatively small area is a significant driver of innovation, accelerated further by the culture of collaboration among experts and innovations that is part of the fabric of Brabant. Then there is the Automotive Campus, which is dedicated to innovations in motoring technologies and contributed to the development of Lightyear's road-ready solar-powered car. And with the advances in more efficient electric batteries already being developed in the region, there will almost certainly be more breakthroughs in technologies for electric vehicles coming out of Brabant in future. To learn more about how Brabant is securing investment to develop the technologies of tomorrow and its history of innovation, download this specially commissioned white paper.
By Brabant