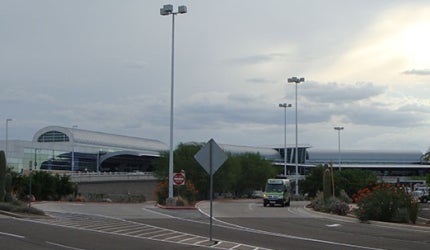 Tucson International Airport is the second largest airport in US state Arizona. It is situated around six miles south of the central business district in Tucson city, in Pima County. The Airport is accessible from highway interstates 19 and 10. Tucson Airport Authority (TAA) acts as the airport’s operator.

The master plan for the airport was first drafted in 1974 and last updated in 2004. Work on the update commenced in March 2011. In 2012, the TAA officially launched work on the implementation of the update, which will formulate a framework for infrastructure development to cope up with demand up to 2030.

By 2025, the airport is expected to handle six million passengers yearly. The master plan update has proposals to expand terminal facilities by bringing in new security screening, additional concessions and public restrooms, and increasing the number of gates from 20 to 29. It also includes proposals to expand the air freight facility located east of the passenger terminal.

Plans to build a potential ground-processing centre and a new air traffic control tower at the airport are also included in the master plan. Funding for the project has been approved and the authorities are waiting for the Federal Aviation Administration’s (FAA) consent.

The location for a new TAA Airfield Maintenance Complex and a new fuel storage facility has been identified. The cost of all improvements is estimated at around $300m.

The airport terminal has three levels with two concourses. Concourse A has nine gates, designated as A1 to A9, and Concourse B has 11 gates, designated as B1 to B11. Ground level one has baggage claim area and two welcome lounges for visitors and passengers. It also includes information counters and car rental desks. Level two has ticketing counters and provides access to concourses A and B. Level three has few meeting rooms, restaurants and shops.

The FAA granted $5.7m to the airport in September 2012 for installation of solar panels on the roof of the parking lots. Phase one construction of the $18m project is expected to start in spring 2013. It is expected to be completed in two to three years. The first phase will generate 1MW of power annually, whereas 2.5MW power will be produced once the entire project is completed.

A major terminal reconstruction project is scheduled to start at the airport in summer 2013. The FAA granted $19.5m for the first phase of the same in September 2012.

The airport apron, which was constructed way back in 1960, will be renovated as part of the project. The commercial aircraft parkingapron at the terminal ramp’s east side was renovated during 2009-2010 at a cost of $8m. The upgrade was designed by Stanec Consulting, while the construction was undertaken by Granite Construction.

The 2004 Master Plan upgrade proposed relocation and widening of Runway 11R/29L. The relocation is estimated to cost $65m. The current runway will be converted into a taxiway. New taxiways and high-speed exits are also planned to be built to ease congestion on the airfield.

The runway 3/21 was improved in November 2011 at a cost of $8.6m. It included resurfacing, drainage improvements, and adjustments to edge lighting and lighted signage.