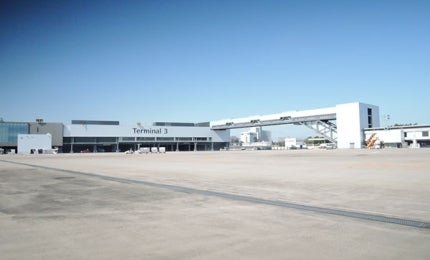 Japan’s Narita International Airport has opened a new terminal, named Terminal 3, for low-cost carriers (LCCs) in April 2015. The terminal is designed to handle rapidly expanding budget-airlines for domestic and short-haul overseas flights at the airport. Construction of the terminal was initiated in July 2013 and completed in March 2015.

The terminal handles 7.5 million passengers and 50,000 aircraft movements a year. It features innovative creations and allows LCC tenants to operate efficiently at low-cost. For customers, it offers a comfortable and easy-to-use environment powered with prominent information signage.

By expanding the interim LCC handling facilities in Terminal 2, Narita Airport could accommodate the low-cost carriers for domestic services since 2012, while the existing facilities are being used for international services.

"The terminal is designed to handle rapidly expanding budget-airlines for domestic and short-haul overseas flights at the airport."

However, the arrangement didn’t meet the LCC business model as it requires lower airport costs and shorter turnaround time. Similar to how the fares and services offered by full service airlines (FSAs) vary from those of LCCs, passengers also have different preferences in terms of services and usage charges.

To meet the pre-requisites of LCC business model, the airport authorities have finally considered the construction of a dedicated terminal building for low-budget airlines.

As the terminal is exclusively meant for LCCs, its design and architecture included all the elements that represent a low-cost airport. The two-in-one design consolidated two or more functionalities into one to achieve economies.

The terminal design mimics an indoor running track with a system of red and blue running lanes – the blue pathways lead to departure and the red ones to arrivals. The colour-coded circuit not only helps with wayfinding, but also provides a comfortable walking experience inside the terminal.

Details of Terminal 3 at Narita Airport

Terminal 3 was built approximately 500m north of the existing Terminal 2 and has a floor area of approximately 66,000m². The terminal is 19.95m-tall and features four floors above the ground.

Facilities at the low-cost carrier Terminal 3

The facilities were designed according to the specifications of LCC business model, which includes no ceiling finishes, non-illuminated signage, a simplified baggage handling system and apron boarding instead of boarding bridges.

The food court located on the landside on the second floor of the main building is the biggest at any airport in Japan, features seating for 450 people and offers a rich variety of food. It can also be used as a resting area during late night and early morning hours. It uses a limited space and is conveniently located to serve arriving and departing, domestic and international passengers, visitors, waiting-to-be checked-in passengers and all other users.

The LCC model also features food and beverage facilities that offer fast food items, including sushi, noodles, hamburgers, coffee and similar things that are possible to serve in minimal time.

The shops and food court are located between check-in counters and security checkpoints.

The LCC terminal can be accessed by walk or by shuttle buses which carry the passengers from the railway stations, car parks and those coming in airport express buses to the bus stops in front of the terminal.

The architecture and interior design of the new terminal was provided by Japanese architectural and design firm Party in collaboration with retailer Muji and Consultants Nikken.